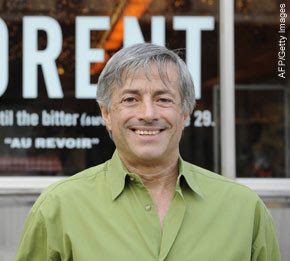 That's Florent Morellet, owner of the soon-to-close Florent, in a Q-and-A in today's Post.

Some people blame "Sex and the City" for the gentrification of the area.

I totally disagree. These are societal changes. We love to simplify things as humans and put labels on things. So the 18th century in France was Marie Antoinette and Louis XVI and a couple of writers. You put some people in charge of some periods. They say I made the meat market. I could have died from the whooping cough at age 5 - which I almost did - and I don't think it would have made a difference in the [area]. Some people put [the gentrification] on Pastis, some people put it on Jeffrey opening, other people put it on the Gansevoort Hotel. It's all of us. Every year since I've arrived there have been people crying that it was not like it was before.

But has it changed for the better?

Let me tell you, in the early '90s, the neighborhood really was so scary with the crack epidemic. The people who feel nostalgic were not coming then. That was the year we actually lost money. I think people don't remember. We had to leave the restaurant in groups of three because almost all of us got mugged. Memory is a beautiful thing and it's totally influenced by emotions - mine as much as anyone's.
Posted by Grieve at 10:23 AM

sad thing is, he's not all wrong. but it's way more fun to blame satc.

Oh now Post finally picks up on this, way much after Jeremiah's blog and the NYTimes piece.

I like the fact that Mr. Morellet puts the trans-gender prostitutes somewhat preferred to the the thrashy people that lives in manhattan now.