Looking at the Forward 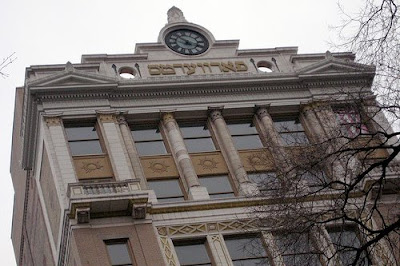 As you probably read, Oscar-winning actress Tatum O'Neal was arrested last night on the Lower East Side, charged with buying crack and cocaine, according to reports. This happened just a few blocks from where she lived in the luxury condo building the Forward on East Broadway.

Hate to use O'Neal's sad arrest as a jumping off point...But! The Forward is one of the most unique buildings on the LES. In July 1998, the Times looked at the fascinating history of the building and its namesake newspaper, The Forward.

First published in 1897, the Yiddish-language Forward was born as Jewish immigration swelled the New York sweatshops and labor unions. It had close ties to the Socialist Party, taking the name of the successful Socialist paper in Berlin. The first editor, Abraham Cahan, had to leave Russia after revolutionary activities, and it was he who molded the paper into more than just a broadside of ideology.

Designed by George Boehm, the midblock Forward Building still towers over the three- to five-story houses and tenements in the area. A common story is that it was built in reaction to the capitalist symbolism of the 12-story Jarmulowsky Bank building, two blocks away at the southwest corner of Orchard and Canal Streets, but that building was begun a year after The Forward's.

In 1963 The Forward began an English supplement, and in 1974 it sold 175 East Broadway and moved to 49 East 33d Street, where it remains. The building was purchased by the Lau family, and for many years a Chinese church has occupied part of the space. The building was designated a landmark just as the owners proposed converting it to a hotel, but the conversion did not go ahead.

Now the building is covered with scaffolding, and the conversion will be to 39 loft-style condominiums, in an alteration designed by Alfred Wen that will include a restoration of the facade. Stephen Lau, acting as agent for his family's company, Chinese Center L.L.C., said that work would take about a year. ''We thought now is the right time,'' he said. ''We hope to have people from SoHo or Wall Street, not just Asians -- it's a bit out of Chinatown.''

[The excellent photo is on Flickr via Wally Gobetz]
Posted by Grieve at 10:42 AM

Email ThisBlogThis!Share to TwitterShare to FacebookShare to Pinterest
Labels: Tatum O'Neal, The Forward