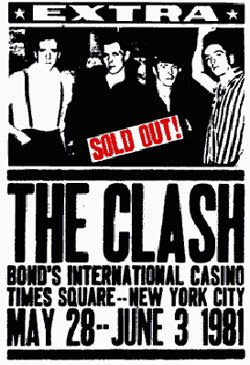 On June 2, 1981, the Clash were on show No. 5 of the 17 concerts they eventually played at Bond's International Casino in Times Square -- 1530 Broadway, between 44th and 45th. (A few nitpickers have mentioned that Bonds often went without the apostrophe. Noted!) Bad Brains and the Slits opened show No. 5.

For pretty much everything you'd ever want to know about the show (and everything related to the Clash), go here.

A little background on all this for people who may to new to this, via Wikipedia:

The site of the concerts was formerly Bonds department store which had been converted into a large second-floor hall. Promoters kept the name because there was a large Bonds sign on the outside of the building. As The Clash had not yet broken out into mass popularity, eight shows were originally scheduled: May 28, 29, 30, 31 and June 1,2, 3, and 5, 1981. However, given the venue's legal capacity limit of 3,500, the series was blatantly oversold right from the first night, leading fire marshals for the New York Fire Department to cancel the Saturday, May 30 performance. In response, the band condemned the brazen greed of the promoters while demonstrating unprecedented integrity to each and every ticketholder by doubling the original booking with a total of 17 dates extending through June.

The next year, the band was back in town promoting Clash On Broadway...and look who Sue Simmons had on at "Live at 5":

For more info on the shows here and here.
Posted by Grieve at 1:14 PM

My then-new boyfriend had a pair for tickets for the show for us--I didn't know about it--but decided not to go, as he wanted to, um, stay home. We've now been together 26 years and I still haven't forgiven him!

My husband went to that show and still talks about it. He uses the phrase "state of the art" to describe it,which frankly makes no sense to me.