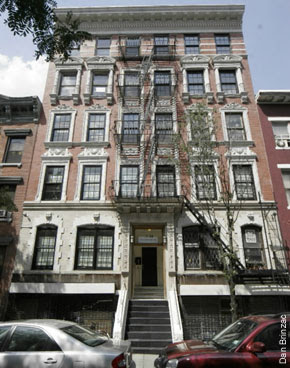 From today's Post:
Rent-stabilized tenants can't stop a wealthy couple from turning their East Village apartment building into their dream mansion, the state's highest court ruled yesterday.
The Court of Appeals found that Alistair and Catherine Economakis can go ahead with eviction proceedings against their low-income tenants at 47 E. 3rd St., as long as they plan to use their apartments for themselves.
The Economakis' lawyer, Jeffrey Turkel, said that's exactly what his clients are trying to do - and said they've already converted 40 percent of the five-story building into a super-apartment for themselves and their two kids.
"They want to expand the home they already have in the building," Turkel said.
That also means evicting the rent-stabilized residents living in the rest of the building's six apartments, a move the tenants are vowing to fight.
"We're all working people, your typical, moderate-income working people. For them to want to kick us out so they can have a luxury mansion - it's ethically and morally unconscionable. I don't know what other word to use," said David Pultz, 56, who's lived in the building for the past 30 years.
The backstory.
Posted by Grieve at 5:40 AM

terrible, terrible news. no way that family is going to stay--they'll convert it to luxury rentals/condos within 5 yrs and get nothing for it but a slap on the wrist.

well, they're last name means steward, so I guess they're just living up to that surname.

yeah, i ditto jeremeiah's comments, they'll stay there for a while and once a new administration comes in or a different judge hears the case within 3-5years, it'll be converted into a luxe rental apt. -- soulless BASTARDS.