Jimmy Carter, Jesus and the Lower East Side 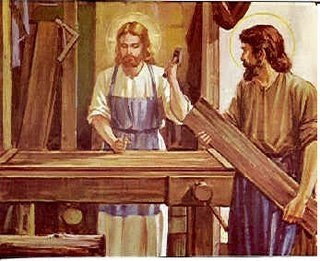 After three days of hammering and sawing, Jimmy Carter, 59, looked more like a seasoned construction worker than a former President, with good reason. While most Americans were using Labor Day to putter around the house or relax, Carter and about 40 members of a Georgia volunteer group spent their holiday renovating a six-story tenement building in downtown Manhattan. "I'm liking the work," said Carter, who was joined on the second day by former First Lady Rosalynn, 57. "I've done a lot of carpentry before, but not like this. The tallest building in Plains, Ga., is two stories high." After work the former Chief of State read from the New Testament at a local Baptist church, whimsically relating his group's good deed to the Bible: "If Christ came to New York he would probably spend lots of time on the Lower East Side -- before it's gentrified that is."

So much potential for a smartass reply.
Posted by Grieve at 8:28 AM

Email ThisBlogThis!Share to TwitterShare to FacebookShare to Pinterest
Labels: Christ, gentrification, Lower East Side is too expensive

Well, JC never came to New York, or LES, for that matter, that's why it was/is being gentrified.