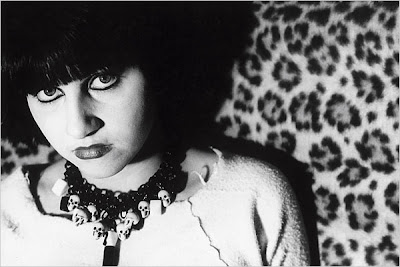 New York City during the 1970s was a beautiful, ravaged slag — impoverished and neglected after suffering from decades of abuse and battery. She stunk of sewage, sex, rotting fish, and day-old diapers. She leaked from every pore.
[Expletive] was already percolating by the time I hit Manhattan as a teen terror in 1976. Inspired by the manic rantings of Lester Bangs in Creem magazine, the Velvet Underground's sarcastic wit, the glamour of the New York Dolls' first album, and the poetic scat of Horses, by Patti Smith, I snuck out my bedroom window, jumped on a Greyhound, and crash-landed in a bigger ghetto than the one I had just escaped from. But with two hundred bucks in my pocket tucked inside a notebook full of misanthropic screed, a baby face that belied a hustler's instinct, and a killer urge to create in order to destroy everything that had originally inspired me, I didn't give a flying [expletive] if the Bowery smelled like dog [expletive].
That's part of an essay by Lydia Lunch included in “No Wave: Post-Punk. Underground. New York. 1976-1980,” a visual history by Thurston Moore and Byron Coley. No wave gets the coffee-table book treatment this month. Ben Sisario at the Times takes a look at the book in today's paper:
Of all the strange and short-lived periods in the history of experimental music in New York, no wave is perhaps the strangest and shortest-lived . . .
With crisp black-and-white photographs and interviews with musicians and visual artists, the book is a loving reminiscence of a largely unheard period, as well as a look at a seedy, pre-gentrified Lower East Side. . . .
"New York at that moment was bankrupt, poor, dirty, violent, drug-infested, sex-obsessed — delightful,” Ms. Lunch said by phone. “In spite of that we were all laughing, because you laugh or you die. I’ve always been funny. My dark comedy just happens to scare most people.”
[Lydia Lunch photo by Julia Gorton]
Bonus: Teenage Jesus and the Jerks live
Posted by Grieve at 7:22 AM

Email ThisBlogThis!Share to TwitterShare to FacebookShare to Pinterest
Labels: book excerpt, books that we will buy, Lydia Lunch, No Wave