Is Le Souk still doing business on Avenue B?

And this rather final sign greeted potential Le Soukers.... 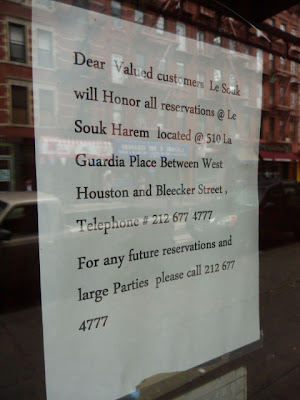 But, in recent weeks, that sign has disappeared. Meanwhile, all the usual Zagat/Time Out/accolades stuff remains in the front windows...along with a menu. (The photo below was taken on Sunday.) If you didn't know any better walking by, then you'd think the place might still be open. And maybe it is. 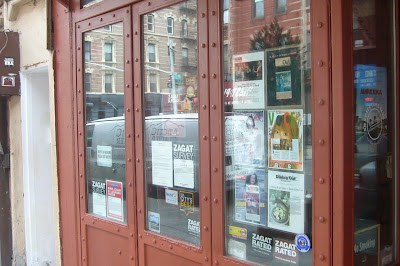 A trusted EV Grieve reader reported that Le Souk was open for business this past New Year's Eve. Said the reader:

"[I]t must have been hired out for a private party, because I understand they can't sell alcohol, but perhaps they can give it away? There were black-tie Secret-Service-looking bouncers out front too. It was just as loud as usual at 2 am ... but with fewer people, and all in much fancier dress. Not too surprising seeing as how it was NYE."

So far, we've been unsuccessful in tracking down anyone who may have been at this alleged soiree... Is this the first in a line of other private parties to use the Le Souk space?
Posted by Grieve at 7:00 AM

I also saw that it was open on New Years Eve and thought that was weird. As an aside, I need to remind myself to never walk down that stretch of Avenue B on New Years.

I've seen it open recently. Don't remember when...but it was open. It wasn't on New Years Eve as I was not in the city that night.

Haven't heard anything. That place was trending B+T toward the end, anyways...

I rant into a friend a couple of days ago.... He said he was going to a birthday party there. Must be open.