There has been plenty of press lately about the long-dormant Loew's Canal Theater on Canal Street at Ludlow. (Downtown Express had the story first; the Post had a follow-up piece yesterday.)

The long-shuttered Loew’s Canal Theater in Chinatown could get a new life as a performing arts center.

The proposal to fix up and reopen the 83-year-old theater is far from a done deal, but the space’s owner agreed last week to do a feasibility study.

Designed by renowned theater architect Thomas Lamb, the 2,339-seat theater opened in 1926. Many of the original, ornate, terra-cotta details remain, although the seats were cleared out long ago when the theater was turned into a warehouse.

Here's a now-and-then look at the space.

If you're interested in more on this theater's history, you can visit Cinema Treasures, where, in the comments, you'll find links to these photos... 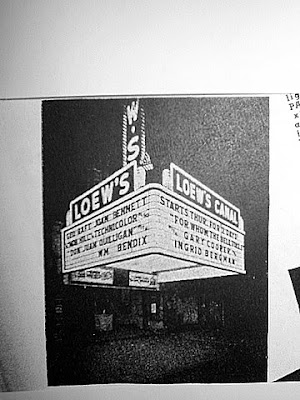 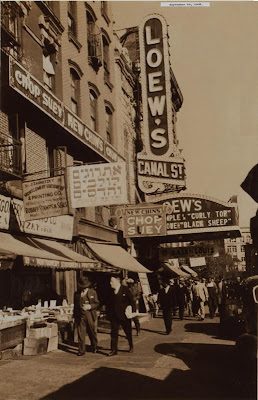 There's more about the theater here ... and here is a site with the original plans for the theater... and here are childhood memories of the theater from Knickerbocker Village.
Posted by Grieve at 6:45 AM

I believe that I saw many great Kung Fu/Sword Masters at this cinema back in the early 70's.

I'd love to see this theater re-opened. That facade has always fascinated me and I've only heard bits and pieces about the mysterious upstairs. I just hope as much of the original decor as possible can be preserved.

this building ranks among the coolest in the neighborhood. would nice to have it utilized as a community space, and not something exclusive.