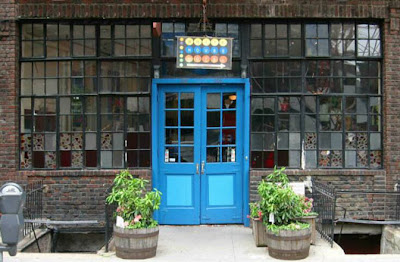 If I did one of those "stories to watch" features at the beginning of the year, then the White House, the last of the neighborhood's SROs at 338 Bowery, would be on that list. There's a long history at this four-story building erected in 1916 that's now serving as a hostel as well as a permanent home for a handful of low-income residents...

The building’s owner, Metro Sixteen, is affiliated with the hotel developer Sam Chang. Their plans: demolish the White House and replace it with a nine-story hotel. Because we really need another luxury hotel around here. (For more read this article in The Villager... or this piece from the Times from last May.) As the Times reported, after Metro's purchase in 2007, the building was included in an extension of the NoHo Historic District, putting a damper on the developer’s plans.

Metro Sixteen has applied to the city’s Landmarks Preservation Commission for permission to develop the site, asking to be considered under the commission’s hardship provision. The city has not yet ruled on the request. But if it is granted, the developer could demolish the hotel and rebuild on the site, effectively bulldozing one of the last remnants of the Bowery’s flophouse past.

Here's a shot by Spencer Platt via Getty Images from 2002...it's of Don, one of the White House's permanent residents...wonder if Don is still around, and if anyone has had to open those instructions on the wall behind him... 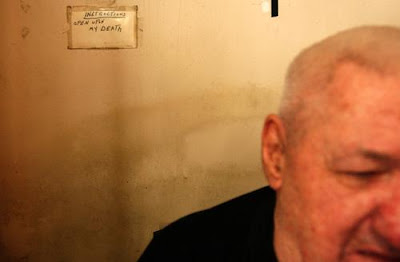 Last September, a sidewalk shed went up for, according to permits, "emergency repairs." 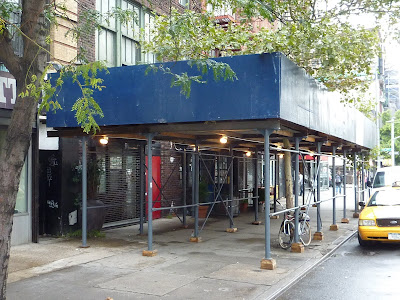 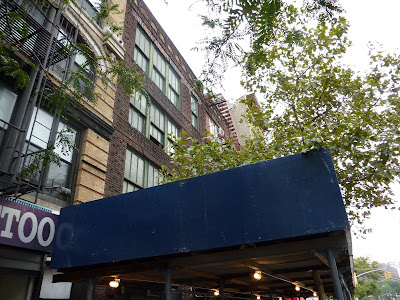 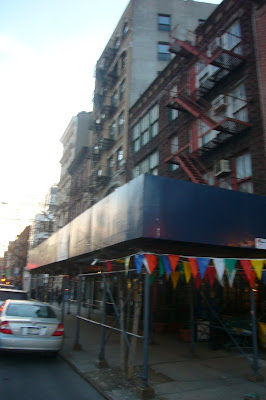 ...butting up against the brand-new Subway next door. (Perhaps it was the Subway manager who complained in December that he/she could not put up a business sign because of the sidewalk shed...)

Imagine if could be easy/convenient to say the emergency repairs weren't enough -- and the building has to be razed. As BoweryBoogie has reported, other parcels of this stretch are now primed for demolition, including 185-191 Bowery.

Let's hope that this address can be preserved/refurbished. There has to be a better alternative than just simply tearing a building down and putting up a luxury glass box.

Meanwhile, a "partial vacate" order exists at the White House...

Back to that Times piece...

Some tenants ... resent the fact that the White House is regarded as a repository of "human interest" stories. At the same time, the convenient concentration of so much human frailty has transformed the hotel into a living museum of sad stories.

It will be another sad story the day the White House goes.

[Top photo via Curbed]
Posted by Grieve at 7:00 AM

Email ThisBlogThis!Share to TwitterShare to FacebookShare to Pinterest
Labels: save the Bowery, the Bowery

There are many more great photographs and stories from the White House (and others including the Sunshine Hotel) in the book "Flophouse: Life On The Bowery" that came out in 2000. The book is a "must have" for anyone interested in the now-mostly vanished culture of life in the flophouses of NYC...

Thanks, NYCD — that book is a compelling portrait of the former neighborhood.

as if there aren't enough trendy hotels in the neighborhood already. soon every block will have at least one...like starbucks, duane reade, or a bank.

is nothing sacred? hopefully the landmark commission will get some balls...

Sigh. I have mixed feelings about the White House - it causes me great anxiety, but I definitely do not want to lose it.

About ten years ago, I experienced some misfortune and found myself without a place to live. Having no friends or family, and looking for somewhere to spend the night, I ended up on the Bowery (where else?) and since this looked like the nicest place (and not a men-only establishment), I went in to get a $30 cubicle. The lobby was full of men sleeping and snoring loudly. At the back, a grumpy old man behind a barred window glared at me and asked what I wanted. I told him I needed a room and he flatly said NO. After some back-and-forth, he said he refused to do business with anyone from New York or New Jersey. All the ID I had on me at the time was my passport, which does not list an address, so I could not prove that I was not a local vagrant weaseling my way into a cheap permanent residence. So, i was turned back out to the street with nowhere else to go.

In the years since, I walk by this place almost daily and feel a couple of things - defiance, because I did eventually pick myself up and got along without the help of the White House and, fear, because it's a reminder of how close the gutter is and how easy it is to be sucked into it. To erase this place would be to forget what the Bowery has always been...that last stop, the bottom from which there is nowhere else to go but up.

Thanks for sharing this, Goggla.

Wow Goggla, that's some story. Is that how you got the eye patch ;)

Ha, no, the eye patch came from too much time on a stool at Mars Bar!

That, and Santa brought me an official Red Ryder, carbine action, 200-shot, Range Model air rifle with a compass on the stock and this thing which tells time. ;)