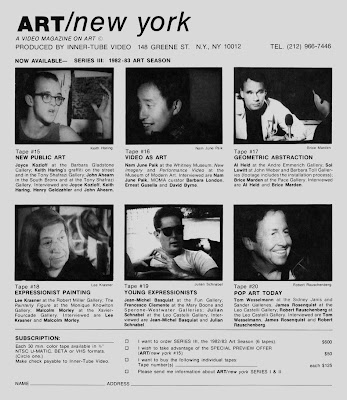 Marc H. Miller has told me about another major addition to the 98Bowery site.

This is the story of the early years of a pioneering effort to provide video coverage of the New York art world. 98Bowery now includes segments from historic video programs with artist interviews and rare footage of exhibitions. Among the footage that you'll find: 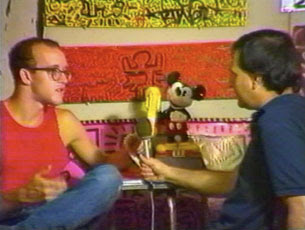 [Photo of Haring via 98Bowery]

As you can imagine, there are stories behind every video here... I asked Miller to share an anecdote about one of the interviews...

"The posting of the Jean-Michel Basquiat tape is in part an attempt to reclaim my credibility. It is the original program that Paul Tschinkel and I made in 1982 and it captures a 21-year-old Basquiat just as he was coming into his own. It includes footage from his phenomenal Fun Gallery exhibition and about four minutes from a 40- minute interview. This may have been the happiest and most upbeat moment of his life.

"Unfortunately, after Basquiat died in 1988, my interview with him was released in its entirety without any editing. In retrospect, this was an incredibly naive and foolish thing to do. Buried within the interview were a few clumsy moments and exchanges in which I played the devil's advocate to elicit lively responses. Over the years, these are the moments that have received the most attention. It's something I've had to live with. I'm just happy after 20 years that I can get the original tape back out there."

Here's an excerpt of ART/new york program no. 30A: JEAN-MICHEL BASQUIAT: An Interview, uploaded to YouTube by Tschinkel.

By the way, the new Basquiat documentary by Tamra Davis, "The Radiant Child," opens tomorrow at the Film Forum.

Just bought my ticket for Thursday's screening of "The Radiant Child." Basquiat is my favorite artist of all time and when I stroll through Tompkins Square Park I think of him and when he was homeless sleeping in the bushes.