Time: 7 PM
Location: ABC No Rio, 156 Rivington St., between Clinton and Suffolk Streets, First Floor
Summary: The community gardens are up for review again and we need to come up with some strategies to save them. 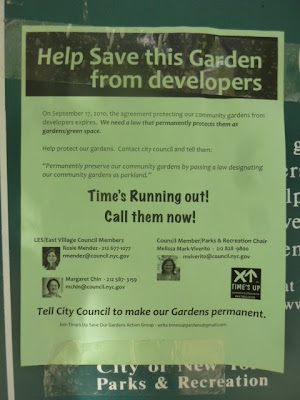 From the meeting notice:

Throughout Times Up's! long history, we have always been educating the city about the benefits of community gardens. Our volunteers and supporters have continuously been involved with protecting, saving, maintaining and creating new ones.

Years ago, Time's Up! and the More Gardens coalition were working together diligently to protect gardens. In an important campaign at the Esperanza Community Garden on 7th Street, we were involved in a two month, 24 hour encampment, complete with lock downs, a working press team, and a legal team.

When the city decided to destroy the Esperanza Community Garden with backing from Donald Capoccia, a serial garden killer, on February 15th, 2000, Time's Up! and More Gardens had helped assemble over 100 people inside the garden. Dozens were locked to cement blocks and decorative towers.

In addition to the lock downs, garden activists sought the help of Attorney General Eliot Spitzer to save the garden. As the garden was being threatened, the activists working with Spitzer rushed this case to Justice Richard D. Huttner of State Supreme Court in Brooklyn. As Huttner was ruling, the city went ahead anyway and demolished Esperanza Gardens.

With news of the destruction reaching court, Huttner awarded temporary restraining orders and his ruling blocked the city from moving against 174 lots until the court was to meet again in a month. Although we lost the Esperanza Garden, the campaign was successful as we heightened the awareness and importance to save all of the gardens that were on the citys auctioning block. The number of lots that received restraining orders was increased to up to 200 more with the 2002 Spitzer Agreement.

Unfortunately, this temporary restraining order is up for review this year. Lets work together with the community and protect these gardens for good!

And here is a news release on the matter.
Posted by Grieve at 9:59 AM

Thanks for posting this. I kept meaning to do a post myself, but didn't have enough info. Losing these gardens would be absolutely devastating.