Verizon is going to blow the budget on brown paint

On Thursday, we noted a Verizon working painting over a few tags on the 13th Street side of the Verison Building at Second Avenue... 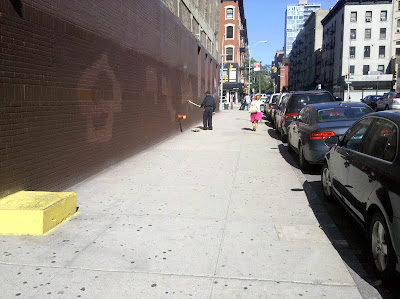 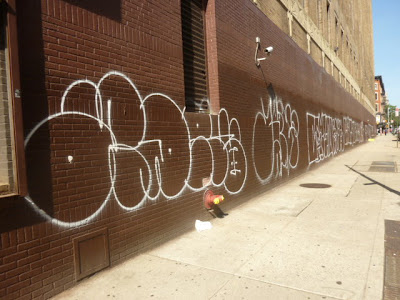 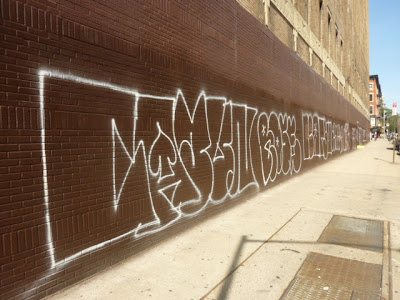 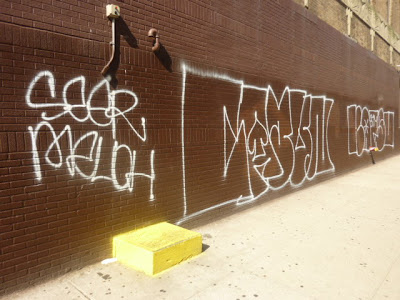 Brownout: Verizon building graffiti painted over
Posted by Grieve at 11:08 AM

while i really hate grafitti and how ugly it makes buildings look. not to mention the work landlords (both large AND SMALL) are forced to do in removing it. the battle between verizon and the taggers is a good example of today's consciousness. both good and bad. it also supplies a good bit of humor, so i do enjoy this battle.
interesting how one can rationalize anything.

I'm really curious how long this back-and-forth will go on for... at what point will Verizon ever just call it a day?

Yeah, it's too bad that this gets so much attention. To me, there's not much artistic talent in the stuff thrown up on the Verizon building (or elsewhere in the neighborhood, for that matter). On the other hand, the Tats Cru and their murals actually beautify walls. That's some talent. I wish we'd see more of that, rather than the crappy "tags" we see in these photos. Just my opinion of course.

Tagger arrested, petition the judge for community service of painting over any new grafitti for the next 6 months.

Much cheaper than this stupid back and forth.

Simpler solution, hire someone local to do a mural on the wall.

Wait, security camera and ARMED security guards? Are you serious? Is that what you want this block to turn into? No thanks, I'm happy with EV being less of a police state.

I like the back and forth. But I like the mural idea even more, and only if it's done by local graffiti artist(s). A good mural by a respected artist will stay clean (eg, Os Gemeos vs Shepherd Fairey) and keep things peaceful. More brown paint or security cameras and guards with guns will not.

I saw them putting up a security camera this morning!

Why is it that people think they have the right to deface private property ?

The building doesn't belong to the public, it's owned by the telephone company, and it's up to them what's painted on it. Pretty simple, no ? How would you like it if someone came along and defaced your bike, car, apartment etc. ?

This is just more self-entitled, narcissistic behavior from a generation who's parents never said NO.

Anon 1:03, what is self-entitled and narcissistic about wanting a community mural on a large expanse of space, public or private, in my neighborhood?

Comparing my bicycle to Verizon's massive building in the middle of EV is a complete distortion.

I live a block away from the Verizon building, and I much prefer the spray-painted tags, doodles, and cupcakes to the ugly, boring waste of brown space on there, which to me borders on blight.

Yes, it is up to Verizon to allow artwork there, and they should absolutely do it, for themselves and for the community, like Verizon is currently doing in Long Beach, CA, for example:
http://www.gazettes.com/articles/2010/06/28/community_news/doc4c24dac589ed0329124771.txt

No, it isn't a distortion at all. It's their property, not yours. Living in the neighborhood gives you absolutely no rights as to what their wall looks like or an entitlement to either demand it be changed or change it yourself.

I've lived in the neighborhood for almost 60 years and the thought that they have a blank wall on their building has never crossed my mind.

Seriously... if you want a public art installation, than write their CEO and request one.