Police relocating vehicles to "no parking" zones; exploding bicycles next?

In preparation for President Obama's NYC visit today, police this morning are relocating vehicles from the motorcade route... 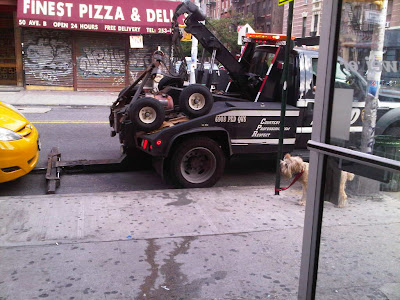 ...and depositing them in "no parking" zones such as here on Avenue B ... as seen in the photo... When someone pointed out that the cab was being placed in a "no parking" zone and now in line for a ticket, the police tow-truck driver said that he didn't care.

Our tipster asked the NYPD if they would also be removing all the exploding bicycles off the route. He or she did not get a response.
Posted by Grieve at 8:46 AM

Email ThisBlogThis!Share to TwitterShare to FacebookShare to Pinterest
Labels: 175 Avenue B, East Village

Why are we still in this "King" mode, with one guy with so much power he needs to be protected from the people?
This is no way to run a civilization, not that I care, but it just seems infantile.