Back in March, I noted the for lease signs going up on the southeast corner of Houston and Elizabeth above the cozy Cafe Colonial, which opened here in 1994... this is what the landlord was selling the space as... (thanks Keith McNally!) 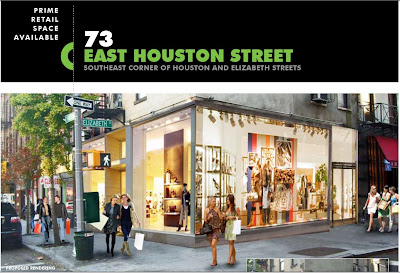 Now, the new tenant here -- Rag & Bone -- is opening shop today... as I witnessed from the sidewalk, they had a pizza/beer preview party the other evening... (Is that pizza from Pulino's?) 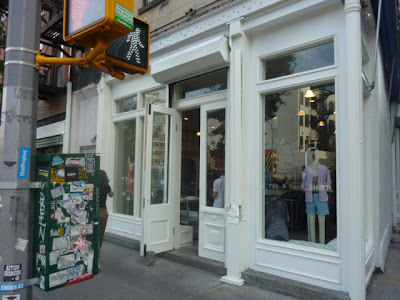 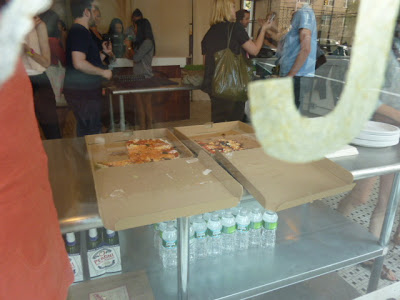 In any event, Racked has more on the new store, include a message from ownership not to take the change in businesses personally... Per Racked:

A company rep did emphasize to us that Rag & Bone "did not swoop in" and kick Café Colonial out with capacity to afford higher rent payments. The beloved restaurant already lost its lease before talks even began, but now at least the nabe gets a shiny new store as opposed to a sad empty storefront. Rag & Bone did make a strong effort to keep many of the iconic signature from ye old Café Colonial, including the lovingly-worn blue and white tile floor, the white kitchen wall tiles and the white painted pressed tin ceilings.

This reminds me of Jeremiah's essay last week titled Faux-dora, in which he wrote:

More and more, beloved icons of the city are getting their guts ripped out for revamping, given over to the wealthy, made exclusive, though the husks are kept intact for the cultural cachet they bring to the new owners, who pride themselves on their dedication to preservation, and receive praise for saving the old holes in the wall from turning into banks.

Well, Cafe Colonial doesn't qualify as a beloved icon, but the trend continues...

Previously on EV Grieve:
Future of 276 Elizabeth apparently doesn't include the Cafe Colonial
Posted by Grieve at 6:35 AM

too bad
cozy cafe colonial was a link to the small-town past of norman rockwell which gave us visual comfort along with comfort food (at fairly reasonable prices).
saving the shell really doesn't cut it (the former church on east 11th street is a prime example of that).
everything is cold, glass, anti-social, complicated and "improved".
one of these days i'm going to find something to give a positive reply to. i look forward to that day.