Cooper Union puts the brakes on its skateboarding bank 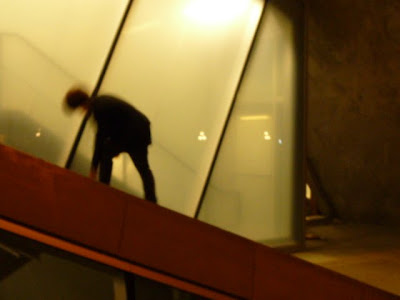 Cooper Union brass have apparently had enough of gleaming the coop... As Quartersnacks point out, the bank has been skatestopped with spiked metal bars running across the entire surface. "Drunk people will still climb on it, but skateboarders will not." 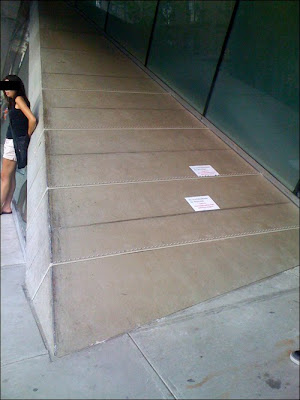 And here is the review of the spot from QuarterSnacks:

Spot: Clearly a display of “progressive” architecture, this retarded appendage of the new Cooper Union building quickly turned into one of best skate spots in the area. The bank is an upwards triangle, fairly mellow, and made out of ridiculously smooth, polished concrete. It is narrow, and you will need to dip in and out of the corner when skating it, or simply pop a wallie over one of the many slanted pillars also extending from the building.

Bust — ♦♦♦♦♦ / Almost Immediate: Your time here typically will not last longer than five minutes, but forces greater than all of us have been known to intervene and grant sessions that last for up to a half hour. The spot is positioned right next to the front security desk, so odds are inevitably against you. Oh, and white people with liberal arts degrees will often stop by and ask you why you’re destroying such a magnificent work of art.

How will the Coop entertain us now?

Previously on EV Grieve:
Gleaming the Coop
Posted by Grieve at 9:54 AM

Are you serious about these liberal arts faggots? I'd knock him the fuck out.

Skateboarding is not a crime.

Please someone spraypaint a big dick on that ramp now.

95% of the skaters in this town are complete douches. Glad to see their toy was taken away from them.

gotta watch out for those "white people with liberal arts degrees" who are always ruining everything.

P.S. it's also a great piss spot on the back alley of the building. I went for a wiz there, and there was another guy with a drink in a paper bag that morning, commenting on my choice location who steped right into that corner to do his number one right after i was done.

I have to give kudos to the cooper union for destroying the classic and putting up this new thing with so many great shady crevasses for the public to utilize best.

Ha! Yes! EV Heave has taken a few photos of a favorite pee spot there... Think the Coop could afford some outdoor urinal cakes!

Skateboarding is not a crime but it should be. Misdemeanor at least. what kind of city/society lets grown men run around attempting skateboard tricks on streets and sidewalks where people are trying to walk. I'm fine with skateboards as a general thing, but do it in a designated place. I love golf but I don't go teeing off golf balls down 2nd avenue. Yeah you can accuse me of being the decrepit, get off my lawn guy, but I am from OC, california and I have hated skateboarding and its dumb culture since I was a kid.

faggots from williamsberg saying skateboarding is ruining their precious building? oh no bethany, where else will we take our facebook pictures and work charles bukowski into another one of our predictably boring conversations?

Go back to OC California then, skateboarding was a part of this city before you were.

clearly, you have never met 95% of the skaters in new york city, so please do not misspeak. if you had a bad experience with one skater, dont stereotype. skateboarders are not criminals- theyre simply people who enjoy having fun and are always looking to find different ways to do so. i dont understand why people go crazy when they see a skateboarder on private property. let security do its job if need be. otherwise, let the kids enjoy because the worst that could happen is they make a little bit of noise on the sidewalk and leave a little mark on a ledge. every skater ive met has been courteous and respectful, keeping out of the way when people walk by and making sure the coast is clear before trying a trick. even with security guards, most skaters will just crack a joke with them and find the next spot, no matter how disappointed they may be. get to know the culture before you fight it and stereotype it