Today, "Premium Rush" follows in the fine tradition of "The Smurfs Movie" and "Step Up 3-D" — movies that filmed scenes on Seventh Street and Avenue A of late... 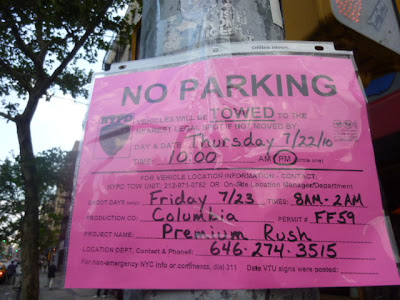 Looks to be a big production.... 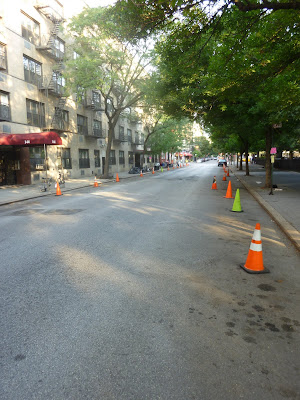 An action story set in New York City, where a bike messenger picks up a package at Columbia University and subsequently catches the attention of a dirty cop.

Bike messenger?! Why aren't they filming on those new bike lanes on First Avenue and Second Avenue?!

Joseph Gordon-Levitt has the lead... in the movie directed by the guy who wrote the screenplays for the "Jurassic Park" blockbusters.

Kind of makes me want to watch "Quciksilver" again.

And in the fine tradition of "The Smurfs Movie" and "Step Up 3-D", I won't be seeing this one, either.

EVG, you make the BEST film references! This is up there with 'Gleaming the Cube'.

'Quicksilver'! Totally forgot about that movie. Didn't even know Laurence Fishburne was in it (back when he was Larry).

The best thing about the movies they film here is when you walk out of your building and start heading to work and some rude crew member says "you cant walk through here!" Really? I guess they just have to shoot that scene again.

Working in film production I have a different perspective than you do. By the time you encounter a set dozens of people of spent weeks if not months and perhaps hundreds of thousands of dollars preparing for that moment. Is it that much to ask that you either wait a minute or else walk a block out of your way so they may complete their work? What exactly is so important that prevents you from obliging such a minor request? Are you late for an appointment to cure cancer or merely selfish and burdened with an undue measure of self-importance? Certainly some crew can be impolite but that's fairly rare, and pales in comparison to the self-absorption of people like yourself.

I love watching people film stuff, it's not really something that happens excessively in too many other cities, so I think it's fun. It's not like it takes over huge parts of the city, it's usually just a block or two or three.

Plus, if it's something I want to see it's even more fun to watch the movie when it comes out because I can remember where I was standing/walking when I saw them filming that bit. It's nice watching a movie and having it remind me where I was and what I was doing when it was being filmed, like an inadvertent photo album.

Great anon comment in response to Dee. It's so obnoxious when people are on some "you don't own the street" type shit like, what? you don't watch movies? fuck outta here bitch. Go back to Connecticut.

No doubt Anon... I've been there. Not to mention that the film business puts a lot of local to work and pumps a good deal of cash into local businesses. Hey Hollywood - make all the crappy films you want here, it keeps myself and many more working!

The reason they're not filming in the bike lanes is that bike messenger generally loathe and avoid bike lanes.

How boring would a bike messenger action movie be if they stayed in the bike lanes! ;)

Maybe I'm a pushover, but they put a little spiel on the notices along the lines of "this movie will highlight all the diverse neighborhoods and citizens of NYC", and that was enough to win me over. Even if the hoods are becoming less diverse, nothing wrong with trying to highlight the diversity that was / is left. Plus they were shooting at Joe's Bar, which is a decent way to highlight the EV - as opposed to, say, some new faux-old-timey overpriced BS place. In my eyes, a big difference than, say, Smurfs blocking the street just so they can shoot some particular exterior - and then edit it so it appears to be near Central Park.