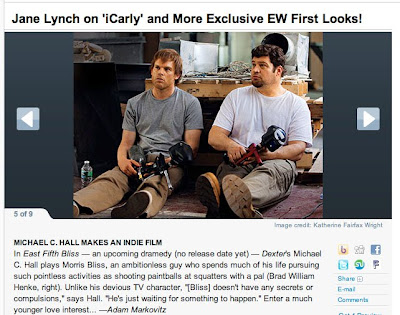 Entertainment Weekly featured a shot from the upcoming "East Fifth Bliss" in its current issue...

The movie stars Michael C. Hall ... not to mention our very own Slum Goddess ... I asked Douglas Light, the former EV resident who adpated the screenplay from his novel, for an update...

"The movie is coming along very well. They're doing all the technical stuff now like color correction, sound, scoring. It looks really good. Everyone is pleased. Shooting to have it completely done by Sept 1."

I think the fellow in the photo with Dexter is the fellow who took the lovely photo of Me and Dexter. Nice guys.

They were both awesome..and were very kind to a girl who just walked in the background in every bar scene they shot..

@eden what will your character name be in the credits?

No name Mcgee! I had no lines..I just was in a few bars scenes playing the jukebox and pretending to drink. I WISH i could get thrown a damn line and a character!