Following my recent post about the Hells Angels, a reader sent along the following photo ... 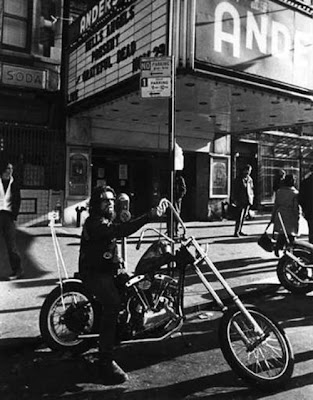 ...when the Angels were presenting shows at the Anderson Theatre at 66 Second Avenue. 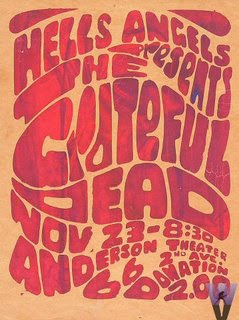 The reader also included a link to the site It's All the Streets you Crossed Not So Long Ago... there, the author lays out a fairly exhaustive history of 66 Second Avenue, which is between Fourth Street and Third Street... You can read the whole history there...

A few highlights though... The theatre likely began its life as a Yiddish Playhouse in the late 1800s-early 1900s... in the late 1960s and '70s, it functioned as a rock venue where everyone from Moby Grape, Procol Harum and the Yardbirds played.

Janis Joplin and Big Brother and the Holding Company had their New York debut there on February 17, 1968 — look who else was on the bill: B.B. King. 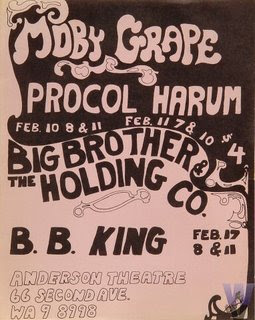 Her post on the Anderson has a gazillion links and photos (some of which I reposted here) ... Far too many to try to mention here... find it all here. 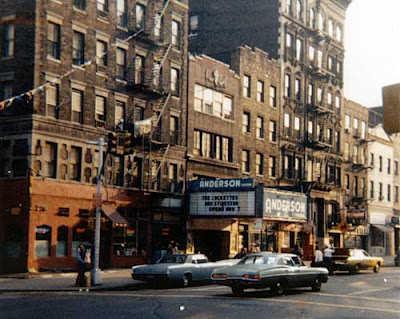 Oh, one last thing. Hilly Kristal ran the CBGB Theater here from late 1977 to early 1978, she notes. The Talking Heads christened the CBGB Theater, followed by shows featuring the Dictators, the Dead Boys and Patti Smith. Here's one description of the CBGB Theater: "The place was disgusting. It made the CBGB club look like the Rainbow Room. We were talking about eighty years' worth of dirt. I mean there was popcorn left over from the last performance of the Yiddish theater in 1925...They did manage to clean up the entryway, and made it look like a subway station."

Anyway, find this and a whole lot more interesting posts on NYC's former rock & roll landmarks at It's All the Streets you Crossed Not So Long Ago. 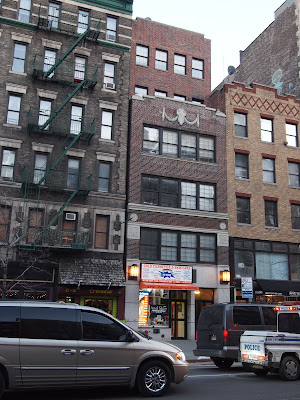 Previously on EV Grieve:
The Loew's Commodore Theatre
Posted by Grieve at 7:00 AM

I've been reading "It's All The streets You Crossed" for a long time - 3+ years at this point - author D.C. is another of those who can never get enough rock 'n' roll history and her site really reflects her devotion.

It's a great site. I've read a lot of the posts through the years, but had missed this one...

I was there just one time. The Angels were certainly not the best overseers of a concert hall. I did go to the Fillmore quite often.

I cajoled my way inside as the demo crews were getting started. I don't care what anyone says -- the place was fucking beautiful!! It could have been saved and restored (the final sale price was only $400k, down from $2 million), but yuppie ghetto developers obviously had other ideas. If only they could have built their shit above the theater....

I remember the theatre being boarded up and sealed and intermittently being reopened. Brings back a lot of sad feelings about growing up down there, going through my life changes and and losing people I love and miss greatly.

I remember seeing a performance by the San Francisco troop "The Cockettes" there. I had no idea what they were about, it was simply a chance activity, totally unplanned. It turned out to be one of the funniest shows I've ever seen. All those mustachioed guys in tutus dancing and prancing. 25 years later I sat next to a guy at an EV bar and we started talking about lost venues. I mentioned the Anderson Theater and the "Cockettes". He told me that he was their manager during that era.

Thanks Grieve...I also found ads and references for the Cockettes' run there in some 1971 issues of the Voice.
http://streetsyoucrossed.blogspot.com/2010/11/1971-ads-other-venues-and-miscellany_8679.html

Thanks, D.C. Incredible amount of information and research on your site. Could spend the weekend there!