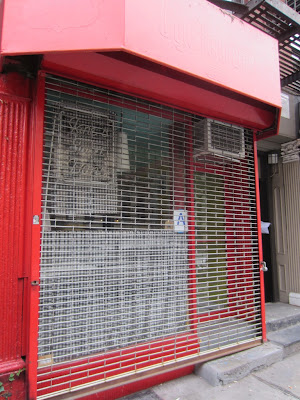 In the last few days, multiple readers passed along word that Jane's Sweet Buns on St. Mark's Place no longer appears to be in business. In early May, the sort of secret 10-seat bar called Proletariat opened in the back of the establishment at 102 St. Mark's Place.

Per a reader the other night: Went "to get some pastries and the shop wasn't open. Bartender at Proletariat said [Jane's] was closing due to poor sales."

We called the number for Jane's, but it has been temporarily disconnected. The shop was also closed during its announced hours of business this weekend. There aren't any notes about a closure on the Jane's website or Facebook page.

Jane's Sweet Buns opened last July in the former De La Vega Museum space, selling a handful of desserts made with alcohol, such as the Rum Runner (a bun glazed in aged rum, Galliano liqueur and cinnamon, among other ingredients).

Jane's Sweet Buns opens today at 2 on St. Mark's Place; features 'pastries inspired by cocktails'
Posted by Grieve at 6:45 AM

Not surprising they had poor sales - curiosity got the better of me and I tried at least twice to buy one of these things, but each time they were out. Poor sales tend to happen when you only make a small batch of product on a daily basis... Take your hipster business model back across the river, maybe you can make money there.

Like abrod, I went in several times to buy certain items they were always out of. If you don't care enough to have the stuff you promise, why should I care enough to buy from you?

That was quick. I was always curious about the place but never felt the need to make a purchase. Puddin' next door always sucked me in.

I'll miss them. They were amazing.

Wasn't Proletariat approved by CB3 on the condition that JSB would still operate as a bakery? Was JSB a front the whole time? I bought a bun or two every so often. Very tasty and packaging was great, but they were basically fancier Cinnabuns and I felt pretty gross/guilty after eating them.

it would be a "bait and switch" if CB3 wasn't in on it with "a wink and a nod", this is their current tactic to continue loonbergs' chemical warfare against the East Village residents, all alcohol, all the time.

In answer to your headline question, I would guess that only her proctologist knows for sure.

So, in light of this, can Puddin' be long for this 'hood?

Might have been good, but honestly the embarrassing name turned me off.

There is a sign on the door that apologizes for the inconvenience (!?) but they are renovating their buns. Proletariat remains open for fancy drinks.