Reader report: TenEleven closing at the end of June 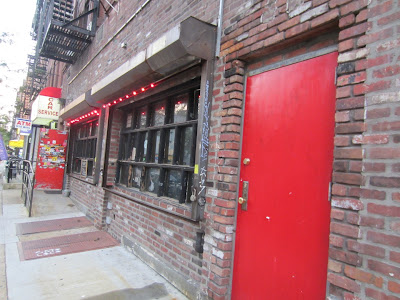 There have been rumors that TenEleven on Avenue C between 10th Street and 11th Street will be closing some time this month. (See this tweet by East Village Eats.)

Via Matt LES_Miserable ... According to sources familiar with the bar's status, the place is "switching over" on June 30. Word is a management group that "runs some other bars" is doing some kind of lease buy-out. Apparently it is likely to become a "very different" place.

Last summer, the bar had to temporarily close while waiting for its liquor license renewal... The CB3/SLA committee refused to renewal the bar's license due to some complaints... the SLA eventually renewed TenEleven's license.

In any event, this is all too bad. As we've written, TenEleven is the kind of bar that we need more of around here ... featuring the works of local photographers and artists ... and hosting the occasional musician as well as group events... It's a solid neighborhood bar that seemingly doesn't appeal to the woo-woo pack that arrives every weekend.
Posted by Grieve at 6:50 AM

An epic loss if true.

For whatever reason, this type of bar isn't working at that location. It was the same recipe when it was Mickeys Blue Room. I blame the horribe blue painted walls.

Who needs Teneleven when one would rather have a 7-11 in the neighborhood.

I'm sure you know about this already, but Marty and the Boys (which should be a new sitcom for HBO -- a reflection of a part life and of the population in NYC not portrayed in Girls or SATC, a whole in between space that hadn't really been addressed. [I digress]) recently visited Teneleven.
http://www.trippingwithmarty.com/almost-live-from-new-york-city/2012/5/11/happy-hour-at-teneleven.html

Missed out on the fun.

Very sorry to hear this. I know the owners and wish them well. Will be a loss to the neighborhood for sure. Had a lot of good nights there and even a birthday party once that was wicked fun with performances and dancing. Bluegrass tuesdays were great too. Wonder how the new management will fare with the neighbors who have an extremely low tolerance for noise.
Speaking of which, hey Neighbors - be careful what you wish for......

Oh no, this is terrible news! "Very different" are scary words and I fear for the worst.

@esquared: Thanks for posting that link, hope you can make the next night out, I'm waiting for the call from HBO!

it's probably the usual vultures who will be taking over this bar. Don't be surprised if you know them or know of them. Once they get one bar or restaurant then they want to take over all of them. It's never enough.

Sucks. Glad I went to the burlesque show there last week. I heard about this then. Grr...

The new bar there will be called Evelyn Drinkery, I believe. The guys are cool and have some cool ideas. They have a website started where you can email them: http://evelynnyc.com/

It's not a cocktail lounge but a drinkery!

Thanks to anon who just left that tip in the comments ... on it!