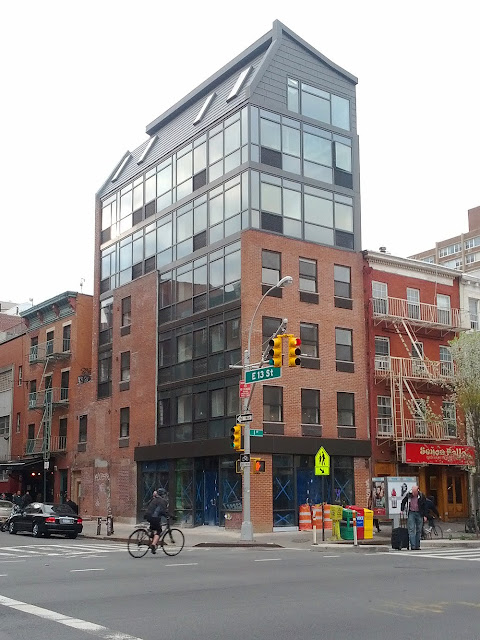 Back on April 26, a worker at the newly unveiled 219 First Ave. told EV Grieve reader Greg Masters that a Starbucks was opening in the retail space here...

Of course! But you never know with such intel from construction workers.

Anyway, in the last few days, paper went up on the windows here at East 13th Street ... 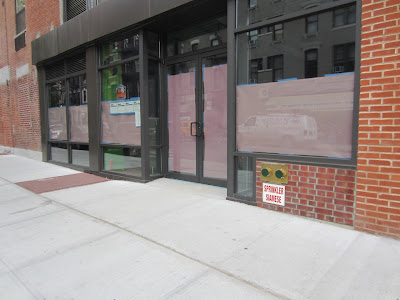 A newly issued work permit points to the incoming tenant... 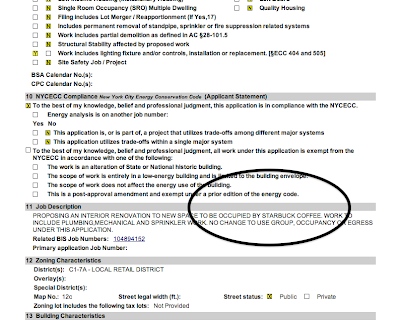 And while we let that sink in... might as well bring up again that the ground floor here once housed the Mee Noodle Shop, a favorite spot for Allen Ginsburg.

As the Times noted in its obituary on Ginsberg from April 1997:

Sure, she knew he was someone important, someone artistic. She could tell that from overheard conversations and from the way other diners would sometimes point at him when he entered. But to Ms. Chong, he was mainly the unfussy man with a dependable hankering for steamed flounder in ginger sauce. "When he came in," she said, "we knew what he wanted."

219 First Avenue ready for a chain store, probably
Posted by Grieve at 6:41 AM

are you serious? two on First Avenue now? i suppose they'll push all the way to Ave. D eventually.

how do we stop this?

Please everyone reading this, get your coffee from somewhere else like a smaller coffee house or cafe. Chain restaurants force rents up and mom and pops out. They give New York City the look of a strip mall in suburbia we don't want of need more of this here.

Starbucks adds absolutely nothing to the neighborhood. Bring back Mee Noodle Shop!

Starbucks, like Walmart, Home Depot, and others, is a predatory chain. They saw The Bean doing well here, and in their former spot on 1st, and so they swooped in. A small business opens and sustains a market, and these predators try to snatch it away.

This is a similar psychology as the people who move into neighborhoods that queers, artists, and assorted oddballs have made safer and more interesting. They swoop in with the goal of pushing out the "pioneers" who made it possible for them to live well.

As for those who came before all that--the really poor, immigrants, people of color, the bodegas, diners, etc.--they don't even count in this game.

The fact that we're now facing two Starbucks on a handful of blocks along First Ave is unacceptable. They will bring in their wake more of the same. They will make it all much, much worse.

How do we stop them? Not buying their coffee won't do it, because there are armies of morons who will buy their coffee every day. Passive resistance is not the answer.

How much longer before the tipping point comes and we finally say, "We're mad as hell and we're not taking anymore"?

Allen Ginsberg's favorite restaurant is now a Starbucks. Is there a more painfully symbolic example of all that is wrong with the world in 2012?

Fuck these people who are ok with Starbucks because "they get what they want" there. Build a relationship with your local business or grow up and do things different. Your choices have consequences. Is it really worth changing the neighborhood to get your macchiatto just right?

@ Anon - 9:21 when you say this like, "Time to fuck shit up. Let Starbucks know they aren't welcome." You should at least have the balls to put your name to it.

The original Bean was in a Magnum/Ben Shaoul building. The new location is in an Icon Realty Building, don't tell me The Bean didn't know. While Starbucks is bad The Bean is no better because it masks what Icon is doing. They should have just left it alone after the Second Avenue location and looked for another spot other than 147 First Avenue. Also there is another cafe on First and 10th which has excellent food and drinks. They are a bit uppity and at this point the place turns into a wine bar, it didn't start out that way.

*on or in the water, doesn't matter, Starbucks will be there.

Kurt, I didn't know playground rules applied here. Will Starbucks think I'm less of a man/woman now? What I told you I meant that we should figuratively fuck shit up? Am I a metaphorical coward? You can throw rocks, I'll hang posters. Let's just agree to choose different windows.

Actually, Jeremiah, there's THREE on 1st Ave, if you count the one b/t 16th and 17th. I do -- it may not be *technical* EV but it's not exactly Gramercy either. And it's also just three short blocks away from this latest shitshow.

I went on a very special lunch date at Mee when I was just about to move to the hood. Sweet memories. I can't even believe this is the same place.

I'm waiting patiently for a Starbucks on Ave A so I can kick their butts all the way back to Seattle. I'm your kryptonite Schultz.

omg! allen ginsbergs favorite chinese restaurant! let's not allow anybody pay rent to run their business there! especially some company with the means to actually pay their rent!

I'm not welcoming another Starbucks, but I'm also not getting sentimental about a plot of land where a building once stood where there was once a restaurant which a writer who has been dead 15 years apparently liked.

On First Ave there's a Starbucks at 17th Street, 9th Street, and the one everyone mocks at 3rd Street.

On Third Ave there's a Starbucks at 15th Street.

This expansion seems rather aggressive in a Subway kind of way, no?

In my opinion, Tarallucci, City Bakery, Mud, Veneiro's, and DeRobertis, have better coffee, food, and atmosphere than Starbucks and The Bean so there will be no need to frequent either of these establishments.

I like BagelGuy's attitude and wish more local businesses were ready to go to war with chains like Starbucks.

I wish that more businesses were ready to go to war with the lousy greedy landlords rather than to be carpetbaggers.

I don't even go to the Bean anymore because of the obnoxious patrons. All I see is people sitting on their laptops, I can't even relax. But I do respect the mosaic work.

Re: "uppity" service at non-chain cafes. Corporations would love to return to slave labor--their profits would be much higher if they didn't have to pay those pesky benefits and living wages. Non-chain employees I guess seem "uppity" when they expect more out of a job.

So does Hot & Crusty going independent count as a victory or something?

Time to look in the mirror. Can't wholly blame Starbucks anymore. We are the consumers, we are the problem. It's a whole new demographic around here at this point. I know because I've talked to some of my neighbors who are recent college grads from places like Wake Forest or Villanova or Bucknell etc. I've heard it from the horse's mouth--there is a whole culture here of these type of transplants. They really do hang out together at places like "13th step" and they really are clueless about this neighborhood and what it once was. It's a tidal wave, it's an epochal shift. The EV as you knew it is officially over. I hate to be a defeatist but IMO it is time to wave the white flag. I myself am planning to move out within a couple of years and it is the thought of that helps get me through my New York days.

I'm looking forward to when the East Village is just 1 giant Starbucks, so I can get my coffee without stepping out in the rain. We could have underground tunnels connecting all the blocks together!

Uh, folks, as has been pointed out on this blog before: Arguing over who is morally superior for choosing whatever shop to purchase a $2 cup of coffee is ... shall we say ... not exactly fighting for world peace?

Does the Bean offer its full-time employees health insurance? Starbucks does. Does the bean take an international stand (or, more in its back yard: a local stand) on issues, such as gay marriage?

Also: If I'm not mistaken, isn't the building I pass each day on the M8 bus -- the "re-imagined" East Village tenement on 9th Street -- somewhat of an architectural pox on the history of the Lower East Side? Isn't it owned by a somewhat notorious landlord? So, isn't the Bean, in effect, somehow participating in the "gentrification" of the East Village? For that matter, isn't a fancy coffee shop, in and of itself -- no matter the owner -- gentrification?

There are things to decry in this neighborhood; in my neighborhood (our neighborhood). The over-saturation of liquor licenses that have turned this neighborhood into an all-night carnival. The city's lack of tending to our rat-infested park. Greedy landlords pushing out long-time, rent-controlled tenants to free apartments to be rented and exorbitant market rates. The lack of a long-term plan to integrate public housing more thoughtfully and sustainably into the larger community (crime-infested tower blocks that warehouse people shoehorned into the corners of the city isn't it). The eviction of seniors from the Cabrini nursing home on 5th Street.

Coffee shops of any kind might be a symbol of, perhaps, overdevelopment or a lack of respect for a well-balanced streetscape. (That is to say: Chains have a place, but so do independent businesses, and so zoning and other restrictions should take pains to ensure a good mix.)

im running out of ways to express things in words.

Does anyone else miss Mee Noodle? That was some good cheap Chinese food.