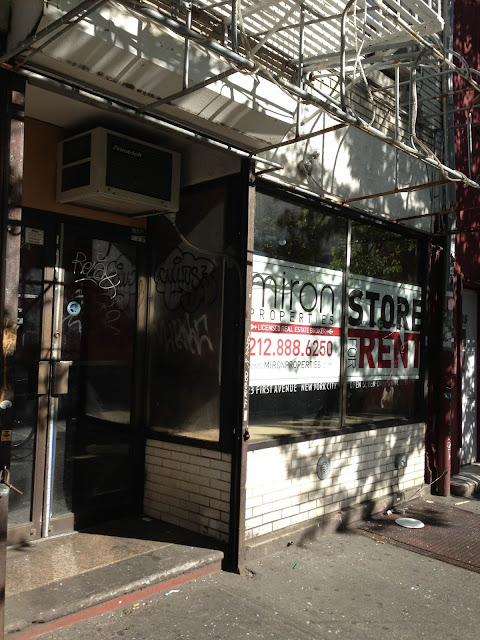 As you may have heard yesterday, Mee Noodle Shop is returning to the East Village after a seven-year absence, as Eater first reported.

Mee was previously on the northwest corner of First Avenue and 13th Street — now home to a Starbucks and that new stack of apartments.

So Mee Noodle Shop, once a favorite spot for Allen Ginsburg (steamed flounder in ginger sauce), is taking a storefront a few doors up from its previous location of 15 years ... to the space recently vacated by Birdbath Neighborhood Green Bakery.

Up until last week, designer Demian Repucci had plans to open a pizzeria here at 223 First Ave. Bruno Pizza LLC was on this month's CB3/SLA committee docket. This would be the first time running a restaurant for Repucci, who along with designer Thomas Schlesser, won the James Beard Foundation award for Best Restaurant Design for his work with Blackbird Restaurant in Chicago.

However, the lease didn't work out, and Repucci said via email that he is working on securing another space.

A broker told Eater that the Mee should be open in a month or so, though that seems really optimistic ... 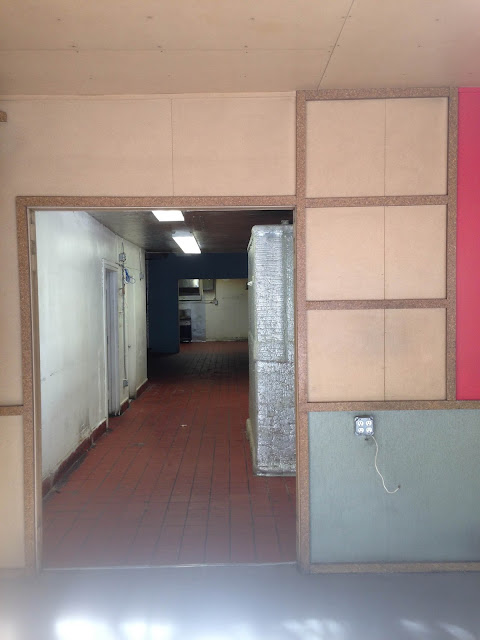 the best news ever! bring on the dan dan noodle

Hip, hip, hooray for Mee Noodle! I've really missed them. It pains me to think of the loss of those old bread ovens from the Palermo Bakery, if they're even still there, perhaps they were replaced with something more green by the new tenants, but I will be delighted to have Mee Noodle back in the neighborhood.

Among the usual bad news, this is a ray of light!

That space wasn't Palermo. Palermo was located in the space next to DeBella Brothers (2 doors from the SW corner of 13th & 1st).

Wait a minute, the Palermo was where Luzzo's is now? Hmmm, what bakery was at this address?

Right, but before Birdbath, I was thinking Palermo but that's where Luzzo's, (fomerly Zito's East) is now. I'm trying to figure out what was there before Birdbath. I'll have to walk over, maybe that will jog my memory.

I want Mee Noodle back, but I ALSO want the same staff. They were so nice. Year in, year out, great place.

Finally, some good news! I have missed the Mee Noodle Shop, and I am so happy it is returning to the neighborhood!

Trixie is correct, there was an Italian bakery in the spot where Birdbath close, they went under some time in the 90s and then it became that place that sold nothing but Conestoga wagon wheel-sized cookies before they became Birdbath. I also thought it was named Palermo; I don't recall there ever being an Italian bread store next to Luzzo's, tho.

I remember the old bread shop on First, cause I still can't find that same (exact) kind of Italian bread... although Russo's has fine Italian bread too!

I'll solve this, I think...It was called Prince of Peace bakery, and the baked for a number of restaurants, but also sold breads in the front of the shop. Am I right?

Prince it is! It came to me just now while I was getting my hair cut and it took all I had not to jump up and come here with the answer!

P.S. EVG, do you know that it's hard to comment here from an iPhone? I always get hung up somehow and have to come to the computer.

And there was another Italian bakery on Avenue A between 12th and 13th Streets. Right next to the place that sold Dry Ice. I miss that place too, Halloween's just not the same without Dry Ice.

Thank god, now I won't have to order from fucking Cottage anymore. This area has been underserved by decent Chinese delivery since they left. Cottage is edible but goddammit this is New York City why should I have to settle for Chinese take out that is merely edible. Fucking hell. There's more things wrong than right with this place in 2013.

Glad to see that we're not getting another Dunkin/Subway/7-11/etc in this space. The Mee Noodles chain is pretty standard American Chinese food and can't really compare to Hot Kitchen or Xian.

@ahoypolloi I believe that the other Mee Noodle, or Noodles, are fakes and imposters, having nothing to do with the real Mee Noodle. They started up before the real Mee Noodle closed, even going so far as to copy their menu. When I brought one of the offending menus into Mee Noodle, the gal I showed it to just laughed and said that there was no affiliation between them.

Mark, Dan Dan Noodle forever as well. Just a note, it does not deliver well, eat it in house.

Trixie, I have eaten at the so called imposter on Second and 30th street, its seems pretty compatible to our old one, the Dan Dan Noodle was pretty damn good there as well.

The waitress who wore glasses who sometimes had her kid with her, she was wonderful.

I want what was there 50 years ago!

People bring their children with them to work because they can't afford a babysitter, not to add to the diners' "experience." Six of the ten lowest-paying jobs in the country are in restaurants.

@Anonymous 1:12pm Hah! I want what was there when the Dutch bought Manhattan from the Lenape.

Nice to know there will be yet another Delivery place with reckless e-Bikes flying on the sidewalks so that the locals can enjoy still-steaming hot-n-sour soup.
We certainely dont have enough of those on the LES.

Do we know that this is the "real" Mee? There are a bunch of them all over that are fakes, all opened to make $ off the original's reputation and none of them half as good as this one was. And has it only been 7 years? It seems much longer.

I was so happy to see this piece!!! And then I read the comments and now I am scared that it won't be the same old Mee Noodle. It was our family's destination on a weekly basis. They loved our kids there, always remembered us, food was amazing, price was perfect. Sigh. I hope it is not false hope...

Mee! Mee! Mee! They used to perform delivery miracles. Food arrived 30 seconds after calling. Waiting to pick up food for takeout? If you stood in the wrong part of the entry, you'd lose a limb. Those workers meant serious business. Welcome back!

My god! I loved that Mee Noodle Shop! I remember being out of town when the building burned, and returning to discover Mee was closed. I no longer live in the E. Vil, but it's good to know about anyway.

I HOPE this is the REAL Mee! We have been seriously deprived in the Chinese food category.

I wonder if they will have the roasted ducks and chickens hanging? Soy sauce chicken? Bean thread option for the noodles?