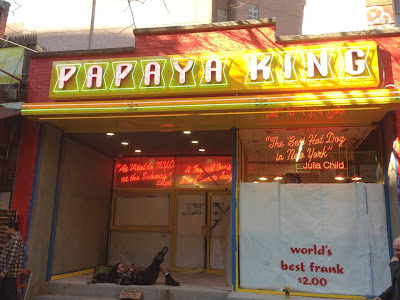 They are also on this month's CB3/SLA docket for a beer-wine license.

Here's Ralph Gardner Jr. talking about them a few years back at The Wall Street Journal:

I almost feel foolish describing Papaya King and its franks, so familiar I assume it is to just about anybody who has landed in New York more than 15 minutes ago. But for the record, it serves an arguably unimprovable hot dog. Slightly spicy and garlicky, its casing explodes in your mouth to release its mouth-watering contents.

Cheers to The King!

The damn things squeak when you bite them. It's very unsettling.