Development back in play for East 14th Street and Avenue C 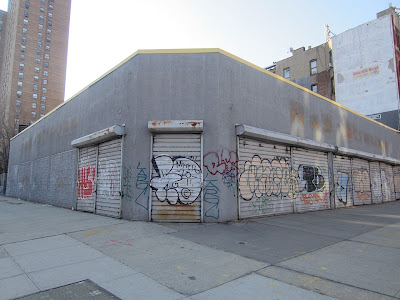 Looks as if there is renewed interest in the southwest corner of East 14th Street and Avenue C.

The R&S Strauss auto parts store here closed in the spring of 2009. And nothing has happened with the building since then (save the addition of more graffiti...)

Billy Gray reported at the Commercial Observer yesterday that Avison Young is now exclusively marketing 644 E. 14th St. "And a near-absence of height restrictions has brokers dangling the possibility of a tower on a site with 65,689 square feet of development rights," he noted.

As we previously reported in January:

According to the Massey Knakal Web site, the building was sold in January 2009 for $12.3 million. As the site noted: "The lot measures 114’9” x 88’and has a total buildable square footage of approximately 36,125 sq. ft. for residential use or 68,262 sq. ft. for a community facility, which will likely be the ultimate use of the property."

Turns out the buyer was Arun Bhatia, who currently has plans in place for a dorm at the former 35 Cooper Square. And the developer filed plans for a new 11-story building here on Dec. 23, 2009, per DOB records. The City disapproved the plans later in 2010.

These plans called for a 65,399-square-foot building. In an email to the Observer, Neil Helman of Avison Young's capital markets group said that the location "on two wide streets with virtually no restrictions on height limitations is also highly advantageous, enabling a tower to be erected, which would take advantage of the great East River views."

He expected a price to be the mid-$20 million range.

Is this a tough sell? The space is bounded by the Con Ed plant, which is prone to releasing steam pressure in the middle of the night and scaring the heck out of people. 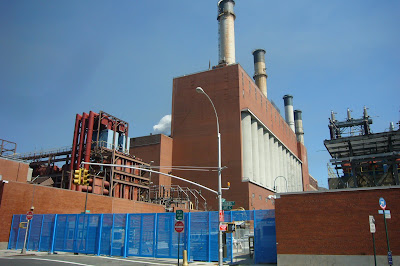 ... and Campos Plaza to the south... Security cameras, funded in part by City Councilmember Rosie Mendez's office, were installed here in March 2012 after an uptick in violence reportedly left residents living in fear. 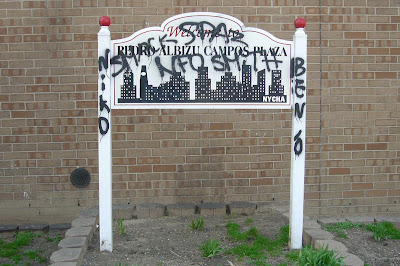 Or is this really the beginning of a new era along here. As Jeremiah Moss wrote about R&S back in May 2008, this corner represents "an opening for the overall Meatpacking effect that is rippling up and down this main artery to reach deep into the East Village. The site has 'flagship opportunity' written all over it."
Posted by Grieve at 6:10 AM

This corner was also under four feet of water at the height of the Sandy surge, so not sure how that will sit with prospective tenants...

...yes, the residents of the next luxury development can swim over to MOPA.

Hopefully a reasonably sized building with something useful as a retail space like a supermarket. I can dream can't I ?

OK, in a very small radius, the following is happening:

*The Stuyvesant PO closing next year

*Two whole tenements between 12th and 13th on A that have been vacant for years; the one on the westside is currently being fully gut renovated

So ... when are the buyouts coming? I mean real ones.

When will we read that the Con Ed plant is relocating to Brooklyn? And the current plant will be refitted as a hotel with luxury residences ... and look a bit like the new Domino plant development?

Those smokestacks at the Con Ed plant would make amazing micro studio apartments!

How high would that building be, exactly?!? Anyone know? (Rob Hollander, how about you?)

And you can reside under 4 feet of water during the next hurricane!

It generates 217 tons of particulate matter, read more here about the plant expansion that occurred in 2001

The Commercial Observer thinks my block is "unglamorous" -- sniff...

Ugh, another glass and steel fishbowl of a building.