The Birdman of the East Village 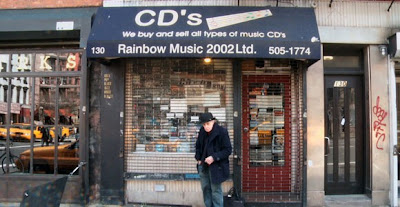 Thanks to a pile of crappy CDs, we now have a documentary short about one of the neighborhood's more intriguing shops — and shopkeepers.

A few years ago, Jessie Auritt lived on on St. Mark's Place. She had some used CDs to sell. She first tried the nearest CD store near her apartment — Rainbow Music at 130 First Ave., where the stacks of CDs, videos, cassettes and records are precariously stacked to the ceiling. The trip didn't go so well. The store's curmudgeonly owner thought her CDs weren't worth a thing.

However, that visit inspired Auritt, a filmmaker who now lives in Brooklyn, to make a short about the store's 70-year-old owner nicknamed The Birdman. She answered a few questions via email about her award-winning short, "The Birdman."

Tell us about the first time you went into the store.
Well actually, the first time I set foot in Rainbow Music was a few years back before I was even interested in making a documentary. I was attempting to sell some used CDs and Birdman told me he wasn’t interesting in buying any of them. He turned me away!

What compelled you to document the shop?
I was initially interested in making a documentary film about the changing nature of the music industry. I was curious about how all of the small independent music stores in the East Village were able to stay in business with illegal music downloading and people buying songs on the Internet. Rainbow Music was naturally the first place came to mind because it's so unique. After talking to Birdman, I instantly knew that I wanted to make a documentary about him and his store. He’s such a quirky and interesting character, I felt he deserved his own film.

What was his initial reaction to your request?
When I first asked Birdman if I could film him for my documentary, he told me that it was okay for me to film in the store but that he didn’t want his face shown on camera because he is a very private person. I shot and edited the film with the hopes that we would like it and change his mind. Luckily he did.

How do you think this store has been able to survive, not only with what's happening in the music biz, but also the local economy?
To be honest, I don’t think the store would survive if Birdman wasn’t so passionate about what he does. As he says in the film, "I don't need the money, but I like the work." Judging by the massive amounts of CDs that are crammed floor to ceiling in the store, I believe him.

What's your favorite thing about Rainbow Music?
Just the fact that it simply exists. I used to live in the East Village. Now every time I am in the neighborhood, I am astonished by how much it’s changed in only the last few years with new businesses cropping up everyday. I really appreciate unique mom-and-pop shops, which sadly are becoming few and far between. Hopefully Rainbow Music will be able to stick around for a long time to come.

"The Birdman" is just one of the documentary shorts that will screen tonight as part of Rooftop Films Summer Series. The films are shown at the New Design High School (formerly Open Road) at 350 Grand St. Find tickets and more details here.

Oh, and the Birdman's real name? Bill. He never divulged his last name.

Cool. I love this store. Never tried to sell anything to him, I've only bought.

The misused apostrophe in "CD's" always kept me away from this place, but maybe I'll take a look now!

I love that store! The Birdman let me stay after he closed one night a couple years ago so I could take photos for my blog. Great guy, wonderful store!

Oh come on, you know that "CD's" and "CDs" are both acceptable depending on which style manual you follow.

Like him a lot. Just bought 3 CDs from him