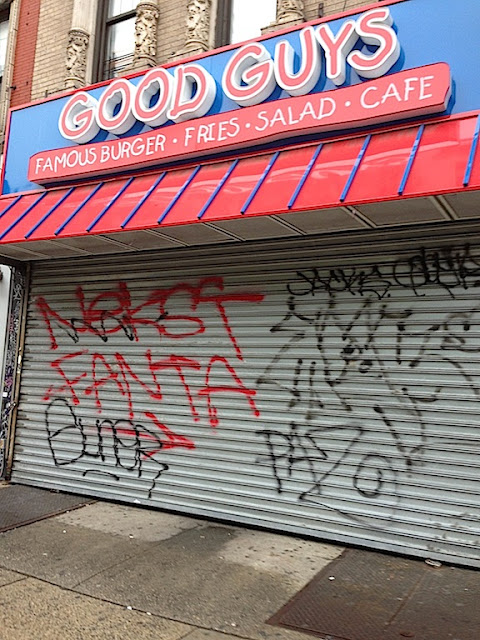 Good Guys, the burger-fries-salad-wraps-waffles-smoothie eatery that replaced a Subway on Second Avenue, has closed. Paper went up on the windows this week. The place opened in late December.

We honestly never saw anyone in the place (though we know that Blue Glass tried a burger once). The menu was about the length of the block. Seemed to try to do too much. (And those sidewalk flags. And that unfortunate typo.)

We spotted an add on Craigslist noting a sale of the equipment here. The add says "we have a list of used restaurant equipment that we are looking to sell in a timely manner. All equipment was purchased aprox 6 months ago. we have acquired this space and do not have use for these pieces of equipment."

So it sounds as if a new tenant has something else planned here that doesn't include:

Meanwhile, about 500 Good Guys business cards are in the gutter on Second Avenue. 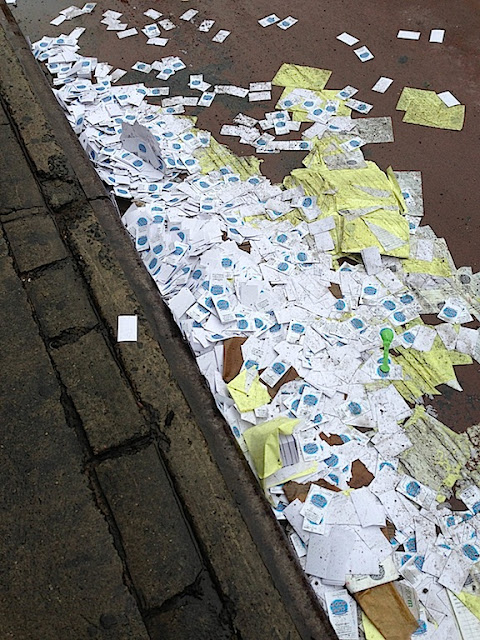 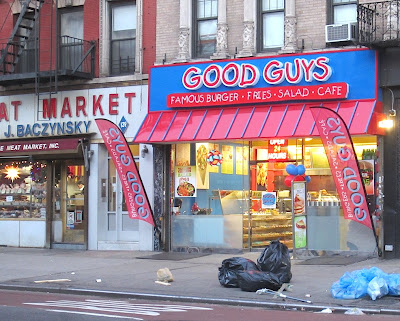 Puts the 'Ass' in Classic Burger
Posted by Grieve at 6:00 AM

So it's kosher for them to dump hundreds of business cards into the street?

Anon 8:09 - Likely they fell out of a ripped garbage bag, but that's just a guess.

Definitely some kind of spillage from the trash...

I ate at Good Guys a few times. It wasn't terrible but wasn't good either. With so many other options near by its easy to see how this place has shut down.

I live across the street and very rarely saw anyone in there. I agree it tried to do too much. I honestly haven't set foot in there since it was a Subway.

I never ate there because there was nothing remarkable about it. It looked generic, inside and out, and the menu wasn't focused.

I tried it a couple of times. Food was ok. The people were really nice though, so I wish them well with what ever they're doing now.

EV Grieve said...
Definitely some kind of spillage from the trash...

...long ago there was a bakery there, right? Does anyone remember?

It was a German bakery with the best chocolate cherry cake ever! The name escapes me

ive been counting the days for it to close. NO ONE was ever in there. PLS LET SOMETHING AWESOME GO INTO THAT SPACE! meaning NOT another yogurt/ice cream shop and NOT another bar.

i tried this place 2 too many times and finally decided to never step foot in there again. twice, the chicken tasted moldy, and i ordered a salmon salad for my wife and it was incredibly fishy. this place needed to be inspected by the health department. i have to say, i'm glad it closed. we should have interpreted the "anus burger" typo as foreshadowing.

I live right around the corner from Paul's ... "why would I go here" is what I asked myself when I saw this place.
Even when it was Subway's better to go next door, get much better sandwich making meat, bread and pickle.
If Baczynsky's ever closes; There Will Be Blood