Avalon Chrystie Place looks to be for sale 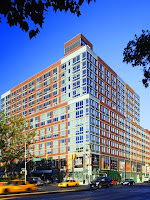 An EVG reader passed along this today from Real Estate Alert:

An AvalonBay Communities partnership is teeing up an apartment property on Manhattan’s Lower East Side that could attracts bids of $400 million.

The 361-unit Avalon Chrystie Place, which was built in 2005, is 95% occupied. At the estimated value of $1.1 million/unit, the initial annual yield would be about 4%. Although the offering is likely to appeal to core investors, a buyer could upgrade the apartment interiors in order to raise rents and boost the return.

The 14-story complex is at 229 Chrystie Street, on the southwest corner of Houston Street ... There is 72,000 square feet of retail space on the street level, most of which is leased to a Whole Foods supermarket until 2028.

A buyer would have to assume a $117 million floating-rate Fannie Mae mortgage, which could be prepaid or augmented with subordinate debt.

Eighty percent of the units, or 289, command market rents, while the remaining 72 are regulated under New York City rent guidelines.

We haven't spotted a listing for the property just yet. Meanwhile, it seems as if you have plenty of time left to shop at Whole Foods Bowery.
Posted by Grieve at 2:26 PM

ugh, is there no end to the richification of nyc? but there is a sort of gallows humor that the rich folks currently living there could be forced out by even richer people.

I still miss the lil' house that used to be on the corner there and sold used scrap. Before that, wasn't there was a famous theater there that I think Minsky ran? Damn, I'm old!

Bring back the empty lot that was there; it was full of trees and awesome!

Bowboy: You're right -- Minsky's WAS there. They were allowed to show fully nude women in the 1910s, as long as they didn't move. I guess jiggling was considered obscene!!

What is REALLY obscene is that Avalon got this entire parcel of city-owned land for FREE and received taxpayer money to subsidize the building of the market rate yuppie ghetto on this site....