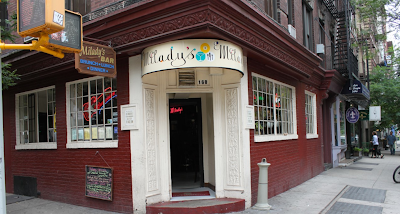 Word is spreading on Twitter that Milady's, the well-worn neighborhood bar and restaurant on Prince Street at Thompson, closes for good tomorrow night.

So we just lost Milday's, Gray's Papaya and Cooper Union. When does the municipal name change to "Bank of America presents New York"?

@evgrieve Milady's closing?! Who do I punch in the balls about this?

We called, but no one is picking up the phone right now.

The building is (or was) for sale. One listing we spotted:

Gothamist gets confirmation on the closure tomorrow night. Ughs.
Posted by Grieve at 2:42 PM

Time for you to create your sister site: WVGrieve.

I am so annoyed with NYC today & this tops it off. I feel like smelly freak bag art trash wherever I go - even though I came here many years ago to freely be art trash. Everything is luxury & everyone is in khakis & button downs. BLAH.

Did a body burst up through the floor here too?

Damnit. I moved nearby after living in the East Village for more than a decade (1 bedrooms are cheaper in Soho than the East Village nowadays, it's a world turned upside down), and Milady's is the only decent dive in the area. The type of place where you didn't know if a group of junkies or gaggle of models would walk through the door next. It will be missed.

Called there last nast and was told they will be there until Sunday night 1/12/14.

Yeah, I've noticed that too.
Been thinking about making the jump myself.
I really prefer NYC tourists to drunk frat / sorority douches.
But I wonder; where does one buy groceries?

Ok, NYC~ listen up: You are destroying the New York City of my youth. First ODessa and Grey's Papaya, then quickly following- 7As, then Sapparo East, NOW M'Lady's?? I met and formed some of the most important relationships of my life in these places. After performing shows at HERE we'd all go to M'Lady's for beer and burgers. Now, a lot of those people are award winning artists. I am convinced the cheeseburgers helped in their success. Back in the day we could barely scrape together the cash for drinks. But somehow we'd manage to get wasted and laugh and share stories. When I think of becoming an artist in NYC, I think of these places- the people I was with and the bonds I formed. I know these live within me, but man oh man it makes me REALLY SAD that they are being priced out of this city. I can't imagine being in my 20's and going to what? Sushi Samba after a show? Not. The. Same. I know we should embrace change, but to quote Woody Allen , "New York is a dying City…"

Overrated hipster "dive" bar. This is not a severe loss.

I first went to Milady's in the early '80's. I sat next to an old timer who carried his tools around on an old luggage cart. He fixed the shop window gates in the area. I remember there being pennies on the bar (?). In the corner was a fridge in the shape of a snub-nosed beer bottle. There was a pool table, but most importantly for me.. there was a Defender video game. That kept me coming back for a long time. I was a bike messenger at Lightspeed messenger service on Mercer st. We'd go there all the time. I remember a bartender named Rebecca. Long brown hair, green eyes and a nose ring. (I'd never seen one of those before). There was a bartender named Mona that became an actress... and Joan ... oh well. I live in London now, so I won't be able to say goodbye to an old friend. Please do it for me.

Too sad! Milady's was a long-time haven in what's become a truly barren landscape.

The information on the building is highly inaccurate. I have lived in this building for 22 years. It is hardly fully renovated, there is no elevator, and to convert it to luxury residential space you'd have to tear it down.
We, in the building have heard nothing about new ownership. There is a ton of conjecture going on as to what lead to Milady's closing. Right now the only one who really knows the whole story is Frank. Either way….it sucks.

Lots of great old bars like Milady's are closing. Here's a piece about it --

When a Bar Dies
themintyplum.com

Go back to tri Friday's its way hip asshole