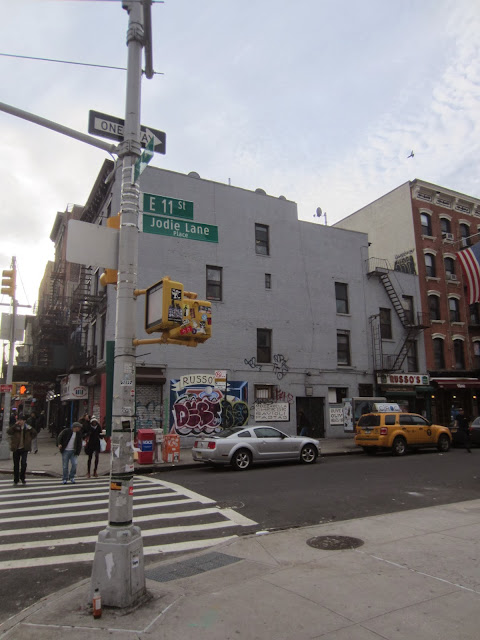 Jodie Lane was a 30-year-old doctoral candidate at the Teacher’s College at Columbia University. During the late afternoon of Jan. 16, 2004, Lane, who lived on East 12th Street with her boyfriend, was walking her dogs. She was electrocuted on a snow-covered Con Edison junction box on the southwest corner of 11th Street at First Avenue.

The street was named in her honor in the spring of 2005. Former Councilmember Margarita Lopez joined Lane's family and friends for the street co-naming ceremony.

"The name of Jodie Lane is going to be there forever," Lopez said, "for Con Ed to remember what they did — that they didn’t care about the residents of New York City — and for it not to happen again." 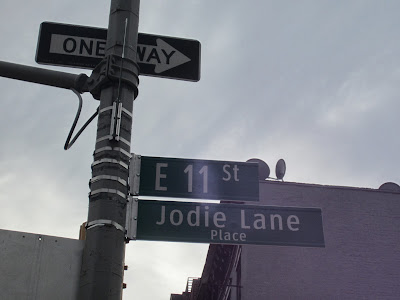 As The Villager reported:

The young therapist’s death horrified the city, and brought heightened awareness to the problem of stray voltage leaking from street fixtures. With pressure from Lopez, Con Ed agreed to do annual stray-voltage inspections for all street lampposts and other electrified street fixtures.

In November 2004, ConEd agreed to pay Lane's family more than $6.2 million and to set up a $1 million scholarship fund in her name at Columbia. 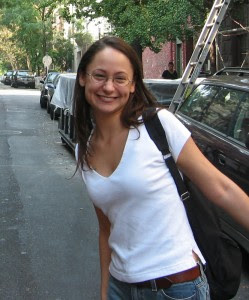 Previously on EV Grieve:
In Memoriam: Roger M. Lane
Posted by Grieve at 5:30 AM

Thanks for posting this reminder. I didn't know her, but I remember this story well, and I think of her often when I am on that block.

What a tremendous loss for all of us. It makes my eyes fill with tears to think how much this great woman would have accomplished in that lost decade, and how truly horrible this experience must have been for her loved ones. A timely tribute, especially after the recent stray voltage incidents in the neighborhood.

We all should be extremely grateful to Jodi's family for their relentless fight to make our sidewalks safer, even though they themselves don't even live in the city (as far as I remember).

I think of her often when on that block and frequently when walking my dogs over Con Ed manhole covers. I was not aware the voltage was from a pole (thought it was from a man hole cover)I am glad to know that. I remember the weather that day was very slushy and she was trying to save her dog. Am I remembering that right?

Then of course a couple of weeks ago there was stray voltage on 7th St. and other blocks with no warning signs posted by ConEd (just random cones and yellow tape - really, Con Ed?). My friend's dog was electrocuted twice. As I recall, a police officer had to call for ConEd emergency services to DO THEIR JOB. Disgraceful.

What is $6.2 million dollars compared to someone losing their daughter???? Its a pitiful compensation upon losing your child's life due to someone elses neglect.

I have zero confidence that Con Ed has taken the necessary precautions to prevent further incidents. Even when they are made away of stray voltage, as with the incident on 7th Street last month, they did a terrible job of communicating the problem to the people in the surrounding area.

When Con Ed says they're "on it" I have to question what it is they are on.

Horrible thing, but I'm always wondering about these payoff's that go up - if she had children I would understand but why do parent's get paid off?

Yesterday as I am walking on First Avenue, I saw a bouquet of White Roses on the pole on the corner of 11th and First Avenue. There was no side or anything. I took a moment to look and say a prayer/meditate since I know white roses stand for mourning and remembrance. Now I now it was Jodi. So sad this has to happen. May she rest in peace and I hope Con Ed took some measures to reduce such incidences.

Nygrump.....the amount paid is not only compensation for the family, it's also meant to be punitive to the wrongdoer. It is to punish Con Ed and provide them with incentive to ensure it doesn't happen again. I don't know the details of the award, but I would have to assume some of the amount paid reflects those punitive damages.

Her parents were awarded damages because they suffered an unimaginable loss when their child was killed due to Con-Ed's negligence. It's impossible to remedy their loss, but millions of dollars paid by the wrongdoer is better than nothing.

Know the facts before you make a comment on the settlement. Funds went to lawyers,research,foundations,scholarships,training programs for the NYPD to assist in these situations,and travel expenses to many meetings to make Con Ed change their safety standards so other lives we're saved.
The Lane family took their horrible loss and made a difference.