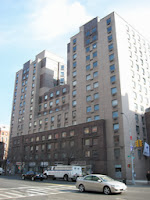 According to published reports, an NYU freshman killed himself after jumping off the roof of the Third North dorm on Third Avenue and East 11th Street early this morning.

"It is with great sorrow that we report that a freshman was found in an interior courtyard in the residence hall where he lived. It appears as though his death occurred as a result of a fall from the roof of the building; police and the University are looking into events preceding the discovery of the body in order to determine the cause and nature of his death."

The university has not released the name of the student. Spring 2014 classes begin today at NYU.

According to the Daily News, citing police sources and fellow students, the 18-year-old victim "was stark naked and apparently high on mushrooms when he plummeted 15 floors to his death."
Posted by Grieve at 11:57 AM

Why would NYPD evacuate the building after the body was found? It seems punitive.

Daily News is reporting another student says the kid looked like he was on drugs (and naked) and punched an innocent bystander right before he ran to the roof and jumped.

Multiple reasons to evacuate the building. If he was suicidal maybe there's a bomb in his dorm room.

Maybe there was a crime (someone pushed him after a fight) and they don't want evidence disturbed.

Maybe he stabbed someone in his room and they don't want anyone walking in and stumbling upon a horrific scene.

He triggered the fire alarm when he went onto the roof.

APATHY AGAIN. someone getting on an elevator naked and you don't do anything?

New details emerge - he was high on 'shrooms, walked the halls naked and went to the roof triggering the fire alarm before falling off the roof. No suicide note. Tragic.

What a shame. Only 18. His life was only beginning.

I figured they'd blame it on weed. Who knows what the mushrooms really were. I used to see store bought mushrooms with pcp, they could have been soaked in bath salts or whatever idiot substances people use under Prohibition because the natural substances are illegal.

This culture of drugs and drinking at NYU is dangerous and completely sanctioned by the school. This poor boy did the same thing that Asher did in November - hallucinating, naked, fire alarm, roof. No one stepped in to help either of them. Security did little to help. Also, when your student is showing behavior issues and problems, the school will not call the parents. From personal experience.

A university really cannot be expected to operate in loco parentis. Critical as I am of NYU for its endless expansion plans and horrid dorm architecture, this was not NYU's fault. This student was sadly on an aggressive, self-destructive, trip.