Building that houses Bowlmor Lanes will convert to condos, like everywhere else around here 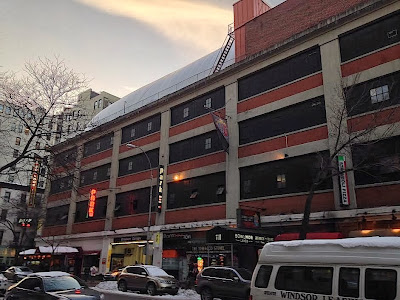 (More) Changes are coming to University Place. A tipster sends word that the building at 110 University Place that houses the parking garage and Bowlmor Lanes between East 12th Street and East 13th Street will be cleared out in the months ahead "in favor of (what else?) luxury condos."

While some shopkeepers and residents have been buzzing about this lately, the development doesn't come as a complete surprise. News of this was tucked away in a Steve Cuozzo item at the Post on Jan. 6. In a piece about Billy Macklowe buying 156 Williams St., Cuozzo also mentioned one of the developer's other properties — 110 University Place. Macklowe, CEO of William Macklowe Company, an investment firm, declined to comment on the future of the building.

However, Cuozzo reported: "we’ve learned from brokers that leases for Bowlmor and a garage at the site expire imminently ... and that demolition for a new building will likely start this summer."

Macklowe purchased a long-term controlling position in the building here back in the fall of 2012, as the Post first reported. At the time there was speculation about Bowlmor's long-term future in this space.

Bowlmor has operated here since 1938. (They also have a location in the former New York Times building in Times Square.)

Meanwhile, in other rather dreary news, our tipster hears that the former Jack Bistro at East 11th Street that closed last fall … 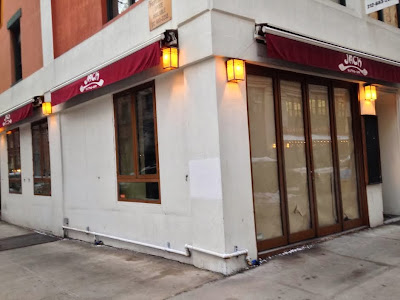 … is being fitted for a — ding! ding! — TD Bank branch. Will be a fine next-door neighbor for the European Wax Center that opened in the space last held by the Cedar Tavern. 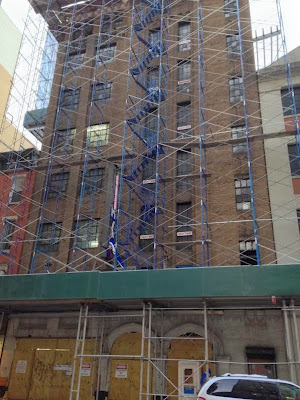 The former parking garage is also being converted into luxury condos. The Real Deal first reported on this possibility back in August. The city OK'd the condo-conversion plan on Dec. 10, which includes the addition of three new floors. 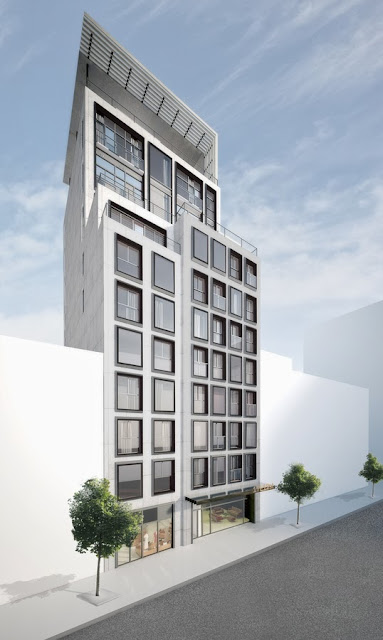 Per the copy with the rendering:

The concept for the architecture was to be elegant and respectful to the neighborhood, creating human-sized apertures at the streetwall, and a transparent and airy aesthetic on the added setback floors. The building was imagined to be re-clad with a cementitious rainscreen system. The rooftop amenity space is a required common area which will allow for a shared exhilarating experience with fantastic city views.

Finally, if you can possibly take any more, the former parking garage right behind here at 12 E. 13th St. is also getting the super deluxe treatment… where a five-bedroom unit will seek $28 million. The condo building will also be the first in NYC to use the robot parking system. (So much for the need for parking garages!) Head to Curbed if you'd like more details.
Posted by Grieve at 5:30 AM

No they're getting rid of Bowlmor? That is total fucking BS! It might be expensive but it's still fun. After they build all the condos and banks, what's going to be left?

Let's see...make a deposit? Or wax my legs? Who can decide?! Thanks TD Bank and European Wax Center for making my life a living hell!

i would happily move into parking garage above bowlmor right now; its an awesome building! why they always gotta make everything look so boring?!? boooooooooooooo!

Aren't you glad you don't own an apartment? You're free to move to New Jersey! Or Iowa!

LA is sounding better and better!

As distinctive as the service island on an interstate. I hope they are getting massive tax breaks leftover from bloomberg!!!!

We need more luxury housing like we need a hole in the head, but I'm sorry, nothing is more corny and lame and suburban than bowling. Bowlmor tried to be some sort of hipster bowling place with their American Apparel ads and whatnot, but people who went there are on par with the bachelorette parties at Lucky Cheng's. It's not like we're losing a roller rink (how I wish we had a roller rink).

It's a great space (inside) but a huge bowling alley was never good for such a small, dense neighborhood and the building is an eyesore. Bowlmor took over the Chelsea Piers spaces and also has a Times Square location - I'll go there to bowl...which isn't a lot these days.

For the 30 years I have lived downtown this mini neighborhood around University place has seen some changes in business' but not so much in new construction. It's a mature place with building going back to 1900 and the antique stores on 10th and 11th have been prospering for decades. This new construction shows that no neighborhood is safe from an invasion of glass and steel luxury condo's and the extinction of small businesses. As others here have already said when the Island is just a gate community for the rich what will those people do when they leave their condos, get waxed while drinking something from Starbucks?

I didn't know Jack's Bistro had closed, I used to love that place. Time to scratch yet another place off the list of things to visit when I come back.

"Cementitious". What a fucking fantastic word.

Bowlmor used to be a gritty bowling alley for bowlers. Bowling is more a lounge/drinking/corporate party activity in the city now, not a serious sport. Bowlmor tried to morph into that position, but it's better suited in Midtown than down in the Village.

Leisure Time lanes in the Port Authority also used to be a dive alley, but shifted to the bar scene alley. The Chelsea Piers lanes too.

Haha "elegant and respectful of the neighborhood." That's some whomp-whomp-who's-your-daddy ugly d-bag architecture if I ever saw it.

(a) Bowling was always a NYC urban pastime...ask Ralph and Ed.

(b) Bowling was and is a pro sport. (went out w/ a pro bowler...it's a serious enterprise.)

(c) most everything around here had an "ordinary" phase. Somewhere along the line, things changed to "luxury" vs. "empty". hmmm...why?

In the early 1970's (1976 through early 1980's), I would go to Bowlmor often with my parents. I remember there was a very nice Asian man named Jimmy who was the elevator attendant. Bowlmor will me missed by Native New Yorkers, like myself, and a loss of a New York treasure.

We used to have a roller skating rink, too... the Roxy. WE all know how that shook out.

BowlMor is/was a Village institution, a destination for countless class/group/organization trips as well as a place where families took their kids to go bowling. Great memories of BowlMor - Stromboli outings in the 60's and 70's. I realize that times and tastes have changed.. I remember "disco" bowling, and who knows what else as the place tried to cater to the changing times. I didn't know that they opened other locations, as I haven't been bowling in decades, but I guess time marches on.

It's bad enough to saturate every square foot with "luxury" apartments, but WHY must they be so fucking UGLY????

THE REAL QUESTION IS: Does anyone know the fate of Stromboli Pizza?

The "real" Stromboli Pizza died many, many years ago.

If people stopped buying these condos, developers would stop building them. Just saying.

There are many buildings and institutions that are worth mourning. A parking garage and WAY overpriced bowling alley are not high on that list.

What about Japonica, and the newsstand? I've been going to Stromboli's for over 30 years. They'll probably put in a Duane Reade and Bank of America in the storefronts and ruin everything that makes University Place a real street with people who know you and have watched your kids grow up. This is really heartbreaking.

It's not Bowlmor that's really going to be missed. It's University Place - once a fairly quiet and contained little strip in the midst of chaos, which will now be just like everyplace else. There are fewer and fewer places - and fewer and fewer times - where and when on can take a walk in the city and just chill. The Meat Market is gone. The Village is gone. The West Side is gone unless you want to cut your way through a wall of European tourists on the High Line. The river is gone, unless you want to get run over by some ahole on a $2,500 bike. It's all going and soon it will all be gone. But tourists and wealthy residents will have everything they need.