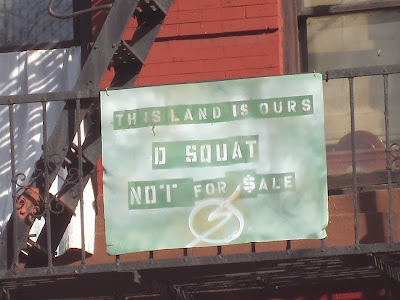 Last time that we checked in with filming for "Ten Thousand Saints," a straight-edge coming-of-age story set in the 1980s East Village, crews fashioned the exterior of 423 E. Sixth St. into "D-Squat."

So "D-Squat" subbed for C-Squat ... and this morning, as these photos from EVG reader Creature show, First Avenue at East Sixth Street is now... Avenue D (thank you EV Arrow!) 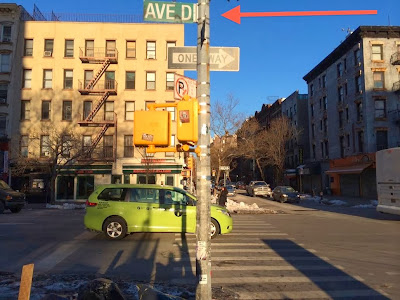 ...there's also a very pre-Cemusa newsstand stand as a prop ... 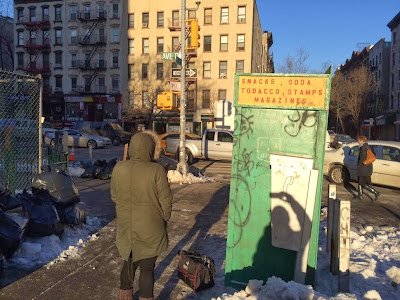 Hopefully the camera won't catch Beckham's abs on the side of the tour bus to ruin that 1980s vibe... 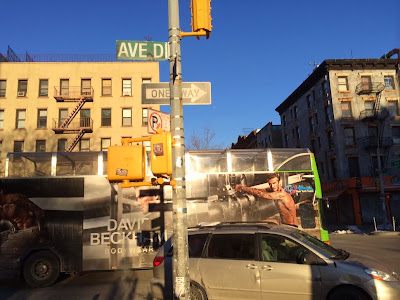 A reader note the first Ethan Hawke sighting of the day... 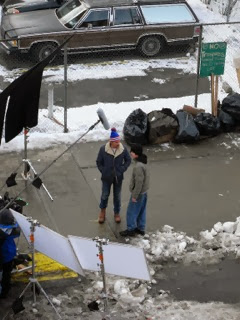 Previously on EV Grieve:
Film crew uses 'D Squat' and phone booths to recreate an 1980s East Village on 6th Street
Posted by Grieve at 10:20 AM

Uhhhh, there is nowhere in ANY alternate universe where Avenue D looked that good in the 1980s. Hell, no.

I AM SO FUCKING SICK OF ALL THE FILMING HERE.

This is just scenery. Not like anyone lives here, right? It is just scenery for the NYU brats to play out their little passion plays, for the drunks to act up picturesquely in front of, for film crews to use at fucking midnight!!!!! outside my windows as something "real" because (as I was told last friday at 11 pm) they can't afford Astoria Studios.

Nah, no one lives here. Go ahead and play.

Why not use the exterior of the REAL C-Squat and throw them a few bucks????

I already don't like this movie, they were under my bedroom window at 6:00AM pounding at the ice/snow to get the fake newsstand over the telephone booth. Ummm Ive been here since '79 they need help with the "costumes", just sayin

"throw them a few bucks" is exactly what they are avoiding.

EXCELLENT idea, Chris Flash... Why imitate when the real squat is right around the corner (basically)?!? Un-be-fuckin'-lievable...

@Chris Flash - Dealing with the real C Squat means dealing with people outside their (very small) comfort zone. They're not historians. They're not really interested in authenticity, and the less they have to interact with the living, breathing human beings in the neighborhood, the easier it is for them. No sense in making things more complicated than necessary.

The most important thing for them is to have something that they can control.

You know all of this, I hope.