Why Jerry's Newsstand will be closed for a few days 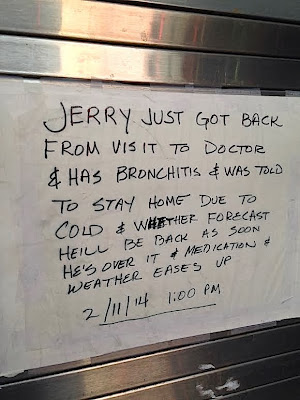 Been a pretty banner year so far for Jerry Delakas ... as the city gave him a new lease on the Astor Place newsstand that he has operated since 1987.

Unfortunately, as you can see in the above sign, there's a temporary setback. Jerry has bronchitis and won't be able to reopen the newsstand until he recovers.

How 1 resilient East Village resident helped save Jerry's Newsstand
Posted by Grieve at 6:00 AM

Get better soon, Jerry! I talked to him outside the newsstand a few days after he got the good news about being able to stay in business, and he was beaming. It was great to see him so happy.

That bronchitis is going around...