At the 35th anniversary of the Pyramid Club 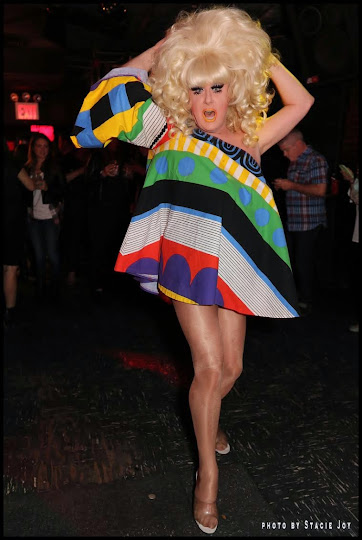 The 35th anniversary party Tuesday night for the Pyramid Club was filled with more media and PR people than guests.

Sponsored by Stoli vodka (whose new marketing campaign is targeting East Village mainstays), there were Stoli drink specials as far as the eye could see and several famous people to gawk at, like Taye Diggs (he played Benny the landlord in the first Broadway production of "Rent," in case you wondered about the connection), Andrew W.K. (the Stoli “Professor of the Party”), and Andy Rourke from The Smiths (DJ’ing ’80s hits when I left). 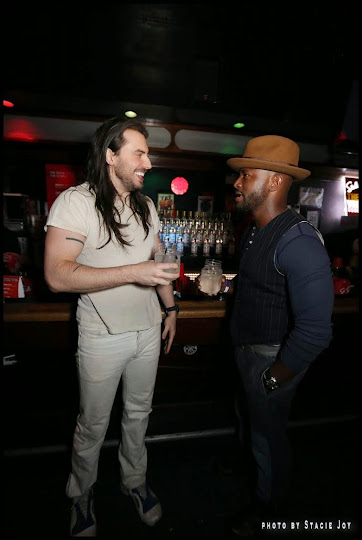 Truthfully, though, I was there for Lady Bunny. She was the life of the party — singing and dancing and then secreting me away downstairs for some one-on-one time.

Lady Bunny told me that she started go-go-ing at Pyramid in 1983 by undercutting the other drag queens by $10 (they normally made $50 and she only charged $40), and quickly became a resident go-go dancer at the club at 101 Avenue A for the next 15 years.

She said the manager was a junkie and she felt he’d be happy with the extra money to put toward drugs. Of course this was before the Giuliani years when cabaret licenses were impossible to score. The East Village’s underground scene was exploding, and bringing its music, drag queens, drugs and culture to the masses.

A low-rent Studio 54, with poor but always-fabulous people is how Lady Bunny described the Pyramid Club. She informed me that we couldn’t sit around crying and bitching for what has changed, what we’ve lost; that we should acknowledge it, celebrate it, and create policies that will create change for the future.

Social media got a chunk of her blame: so many people out there documenting everything with their phones instead of being in the moment and enjoying what’s occurring in real time. We talked about how depressing the news can be and how she recommends that we log off, go out and enjoy what’s happening now in the city.
Posted by Grieve at 9:54 AM

I love Lady Bunny's attitude. If anyone should be complaining about everything we have lost, it is her. I am going to be inspired by her advice and stop complaining--for today at least. ;)

In addition to social media, serving drinks in those mason jars is also to blame.

Was this even advertised in places the old Pyramid regulars might have found it?

Amen - "She informed me that we couldn’t sit around crying and bitching for what has changed, what we’ve lost; that we should acknowledge it, celebrate it, and create policies that will create change for the future. "

Wow, I love Pyramid club! It was the very first club I went to as a freshman in college (FIT)in 1989!I still live in this neighborhood and I still go, usually on Saturday nights.I didn't know about this! :( So many memories there.. I still take friends there sometimes too. Wish I had known about this!

I wish I had known about this event. I would have gone!

Sorry folks that you didn't hear about this party. It is my understanding that it was a private event or by invitation only. I wouldn't have been let in had it not been for Grieve! I wish the club regulars had been invited as well.

She was an amazing DJ as well, and always was kind, sweet and tipped me well when she bought gum from me when I was a cigarette girl.

And the monet that Pyramid Club has gone by invitation only is also to blame.

and that's why I wasn't invited.

I would love to know a little more about the history of the Pyramid. I moved to the East Village in 1981 at the age of 19, and I am still here. The first reports of the Pyramid I heard about were at "the Bar" in 1982."The Bar" was the original gay East Village bar, and it had been there for decades, on the South East corner of 2nd Ave and 4th Street. In 1982, everyone at The Bar said The Pyramid was a new gay club on Ave A, which at that point was a very dangerous place to venture. I remember meeting Rene Ricard, the poet and Warhol star, and him saying to me that The Pyramid was cool, because it was open late, and filled with waiters and bartenders who went there after work.

In 1982The Pyramid was considered new. This EV Grieve story says it opened 35 years ago, which would mean it opened in 1978. I do not believe this is true. If it were, everone at The Bar would have known about it earlier

I was a little disappointed that Bunnie was quoted as saying that 'the manager' of The Pyramid was a junkie and would be happy using the extra money he saved by hiring her at a lower rate so that he could use the extra money for drugs.
As someone who was involved with the opening of the Pyramid and very familiar with all the primary players and all that they did to both seek out, and promote new talent, I find this comment to be out of the range of something that I would think Bunny capable of saying, and if she did, I hope it was just a lapse in judgement. There was a tragic amount of drug abuse at the Pyramid from some of the principles, but ultimately, they paid the price with their lives; just when the ignorance of how HIV was spread could do double damage to those who were gay and also were using IV drugs. The best years of the Pyramid and the opportunities offered to young performers like Lady Bunny wouldn't have been possible without some of those 'Junkies'. I, for one, have always remembered them with a sense of sadness that their tragic loss at such a young and creative time in their lives will never be replaced.

Someone has to say damn I miss Dean Johnson and Dean and the Weenies. Loved ya Dean.

"... we couldn’t sit around crying and bitching for what has changed, what we’ve lost; that we should acknowledge it, celebrate it, and create policies that will create change for the future ... being in the moment and enjoying what’s occurring in real time."

I moved to Ave C in 1981 and use to hang out at the Pyramid when it was only a blue collar dive bar. It was common to see you postal workers, off duty cops, etc... Soon after the bar became an artist hangout in the evenings and the dancing and performances became a regular thing. I met my boyfriend in spring of 1982 and we are together to this day and live just blocks from the Pyramid. We get a kick out of seeing the posters in the windows celebrating "80's" nights. Someday we got to make another visit however this would have been a great time to do that. Love you Pyramid may you live as long as your namesakes.

Thank you anonymous (November 1, 2014 at 10:30 AM). It explains why none of us young gays and the artists at "The Bar" had heard about the Pyramid prior to 1982. I lived (and still live) 3 blocks away from the Pyramid and was a total club kid, and so I would have known. And I agree with the commenter who mentioned it is totally out of order for Bunny to call the manager a junkie. Puhleeeeease!