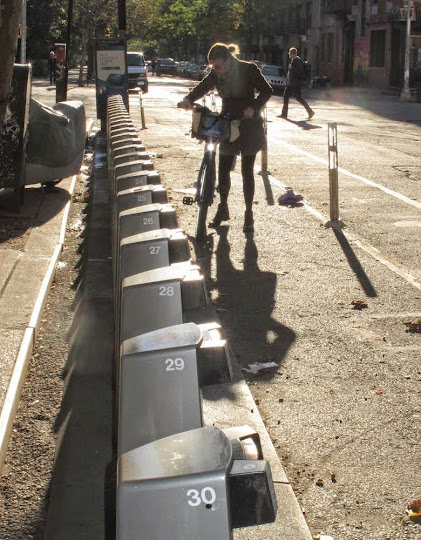 Via the Citi Bike blog...

Today, we and the NYC Department of Transportation announced some big changes. Our parent company has new owners, and they have named Jay Walder, a leader with a deep passion for urban transportation, as the new CEO of Alta Bicycle Share.

There is also big news for Citi Bike. Our system will double in size by 2017. New neighborhoods will be added to our system beginning in 2015. By the end of 2017 we will have 6,000 additional bikes and over 375 new stations. The first new stations will be installed in northern Williamsburg, Greenpoint, Long Island City and further into Bedford-Stuyvesant, all neighborhoods originally planned to be part of Citi Bike’s initial deployment. If you would like to suggest a new location for Citi Bike stations, visit the Department of Transportations’s “Suggest A Station” siting portal here.

NYC Bike Share will use this winter season to overhaul the entire fleet of bikes and service docks and kiosks, ensuring that Citi Bike is ready to roll come spring. We will work closely with the team at Alta Bicycle Share to improve our operations and the technology that powers bike share.

Finally, we will be changing Citi Bike’s membership plans. Our Annual Membership rate will change to $149/year. This means a full year of unlimited Citi Bike rides will cost just a bit more than one monthly MetroCard.

At this time, you may still sign up for a new membership or renew an existing subscription at the current $95 rate. We will let you know in the coming days when the rates will increase.

Those "unlimited" rides are actually limited to 45 minutes and then you get hit with "penalties" - of course you can check in your bike every 44 minutes.

These prove you're not a robot things are just about illegible.

Better than the MTA--they raise their fares all the time and give you fuckall in return. If anything service is getting worse because there's more fucking people here all the time. Oh excuse me, maybe fuckall was a bit extreme--in some stations now they do have those digital readouts that tell you when the next train is coming. Still though, that's not really an actual improvement in service, that's just keeping riders better informed about their incompetence in any given moment. I realize this post is about Citibike but who cares, fuck MTA.

they should have raised the annual fee higher
and lowered the daily fee.
if they can attract more daily riders than they would make way more revenue

From the "The War of the Worlds":

"It was the beginning of the rout of civilisation, of the massacre of mankind. Directly below him the balloonist would have seen the network of streets far and wide, houses, churches, squares, crescents, gardens--already derelict--spread out like a huge map, and in the southward blotted. Over Ealing, Richmond, Wimbledon, it would have seemed as if some monstrous pen had flung ink upon the chart. Steadily, incessantly, each black splash grew and spread, shooting out ramifications this way and that, now banking itself against rising ground, now pouring swiftly over a crest into a new-found valley, exactly as a gout of ink would spread itself upon blotting paper."

As Jeremiah Moss has said, Citi Bike is an engine for hyper gentrification.

Interesting that the Citi Bike blog post doesn't mention Related. What exactly are they getting out of this? Is it simply a philanthropic venture?

The big problem is that since Citi Bike's supplier Bixi went bankrupt in January, no new bikes or docks have been available. Where are the additional 6,000 bikes coming from?

Related seems to be very happy to continue in the Citi Bike tradition of overpromising and underperforming.

Hard to believe that they hired Jay Walder to run citibikes. When Walder ran the NYC subway system he totally screwed it up. When he cancelled the V train he turned the 2nd Ave subway from an easy commute to the packed-like-sardines trip that it became. When he went to run the Hong Kong subway, they quickly fired him after he screwed up their system. Geniuses at Citibike have just hired him to screw up their system. How does this guy keep getting fat paychecks?

This is a great program and it's just getting better. People would be smart to sign up now, while the price is still low!

Great is not a word I've associated with this program, especially if you bike at hours after the morning/evening rush: its either no bikes or full docks.
I dumped it at the end of my year after too many aggravations, briefly considered joining a credit union to bring down the price to $60, but its just not worth it even at the reduced price.
I ended up buying a cheapo bike and got some air free innertubes since I use the bikes for short hauls like shopping/visiting friends around the city & have my better bike for touring.
[...and most of the time, especially the weekends, you can find these bikes abandoned for free rides by the drunk richies who don't care how much is dumped onto their cards ;)]

Funny how the first commenters biggest complaint about the MTA is that the trains are crowded. No shit. We live in a city. And don't you think the CitiLanes are about to get a lot more crowded as well?

Surprised no one has pointed out that almost every dock along TSP has been broken by vandals. One of the few places in town where you consistently can't park a bike.

"NYC Bike Share will use this winter season to overhaul the entire fleet of bikes and service docks and kiosks, ensuring that Citi Bike is ready to roll come spring."

@shutuphooker everyone should join a credit union anyways...it is the socially responsible thing to do. lespeoples.org

The system isn't perfect, but if you augment your other travel it still saves money and gets you exercise...I make a lot more incidental and short trips now that I don't have to deal with my own bike (except for long rides). I honestly don't see what everyone's big problem with this is...people should be riding bikes more often instead of griping about the old days

According to the Citi Bike website, the price increase is effective immediately. They changed their minds about the last paragraph above. Nice way to win customer goodwill!

Surprise, they are a real estate company, they never miss an opportunity to raise prices. They just upped the annual price, with tax it comes to $162.22. :Let the price hikes begin...