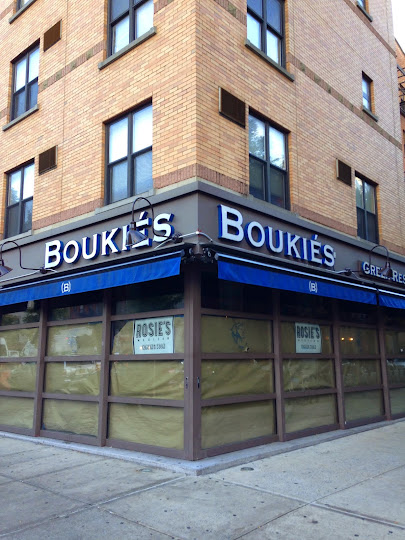 Signs are up now for Rosie's Mexican, the incoming restaurant from Vicki Freeman, Marc Meyer and Chris Paraskevaides, who own Cookshop, Hundred Acres and Five Points … 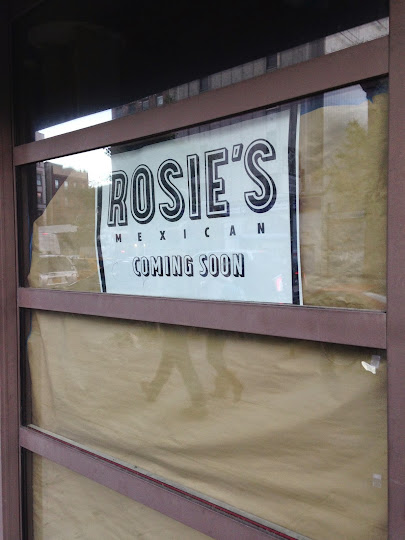 According to a fall preview at Zagat, the restaurant on the corner of Second Avenue and East Second Street will be "based on Meyer's travels to Mexico. Expect market-driven dishes cooked on a comal flattop grill as well as stews, homemade tortillas and more."

The Greek-themed Boukiés closed in March after a two-year run.

For sale: Everything must go at the former Boukiés space on 2nd Avenue
Posted by Grieve at 4:54 AM

That corner is cursed. Several restaurateurs with impeccable credentials have tried to make a go of it, yet they all failed. To my palate, 'Heartbreak' was the best. Still, the best of luck to the new operators.

If it's good Mexican, it'll be my go-to place! Fingers crossed.

Let's all wish them luck, NY needs better Mexican Restaurants, as anyone who went to the old Mary Anns or Caliente Cab Co. knows. Someone will eventually break the curse, and at least it isn't another Starbucks of 7-11.

are there any restaurants named after real people anymore?

Ugh too many mexican places.

Vicki Freeman, Marc Meyer and Chris Paraskevaides none are Mexicans and the restaurant will be "based on Meyer's travels to Mexico." And Hundred Acres, Cookshop, and Five Points are like invite only country clubs. But these are what the patrons are looking for in the East Village today. At least they're opening as a full service Mexican restaurant as opposed to that other one calling themselves a restaurant serving only tacos and lots of booze.

the place is just too big to turn a profit. they gotta break it up into 2 places. that's the only chance for anything to survive more than a coupla years. ugh.

Heartbreak was fantastic, and tragically, they even got a Michelin star on the day after they closed. The chef at Heartbreak had been in the neighborhood for longer than even me, since the 70's, at a fabulous Swiss place on East 7th street, I forget the name. But the stupid community board didn't give them a full liquor license, and so the fabulous Heartbreak closed, only to make way for a very mediocre Boukis, which was hideous. And now, we are going to get yet another "experimental" Mexican place, when we already have Black Ant a block north, which isn't doing terribly well, With their ants sprinkled on the guacamole, and the appetizers of crickets in Mole sauce. Don't get me wrong, Black Ant is fantastic, in spite of the dishes with the bugs, but we don't need another Mexican place a block away, particularly if it does not have a full license. Black Ant does have a full license, by the way. This new place will not survive without a license to sell tequila...