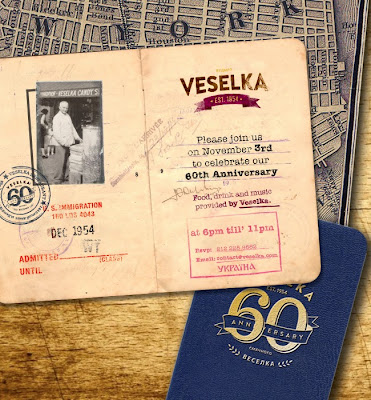 Veselka has been celebrating its 60th anniversary this year. Back in the summer, the restaurant at 144 Second Ave. (at East Ninth Street) turned prices on some items back to 1954. (Surprise! There were lines!)

Now on Monday night from 6 to 11, Veselka is getting rid of its tables and serving free food. Per the invite: "Mirth and Mingling Strongly Encouraged!"

As the Veselka anniversary invite notes, in 1954, a house cost $10,000, rent was $85 and a movie ticket was 70 cents. And Wolodymyr Darmochawal and his wife Olha opened a small newsstand, candy shop and lunchonette that they named after the Ukrainian word for "rainbow."
Posted by Grieve at 5:00 AM

I haven't been back since the asshole waiter ruined my birthday breakfast several years ago. All I wanted to do was say good morning and to order. All he wanted to do was stand against the wall and glare at us.

Well they have finally realized that that a few hours of rollback prices was a very cheap way to mark 60 years of presence in EV.

I have a soft spot for Veselka and go there often. But as the first commenter said, some of the staff could really be nicer. It's about 50-50. You may encounter someone friendly and competent, or else an employee who greets you with surliness and generally brings down the vibe (servers AND hostesses). V's pricing treats itself quite fairly. Customers would feel better about the money if it bought a little sugar, too.

Or is being abused part of the Eastern European experience?