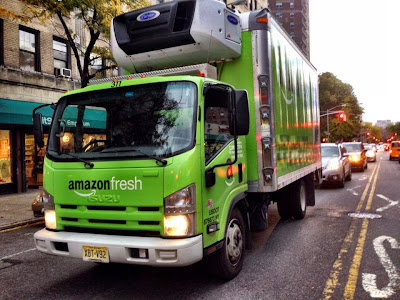 On Friday, Amazon launched its grocery delivery business on the East Coast with service for now to Park Slope.

According to Re/code, who first reported on the service here:

Amazon Fresh customers in the city who place orders before 10 am will receive deliveries later that same day; orders placed after that time will be delivered the following day. The service is known mainly for groceries, but also offers thousands of other items such as electronics and toys that are available for same-day delivery as well.

A spokeswoman declined to say when the service might be available in other parts of New York City, including Manhattan.

The driver told Michael that the service would begin in the East Village in the next few weeks.

Re/code noted that the company is storing Amazon Fresh food in a new warehouse in Avenel, N.J.

Nothing says "I just have too much money to spend on groceries and I'm too (lazy) busy to shop in a grocery store and who cares if these trucks park with a loud refrigerator unit running in the evenings when most people want to relax with a little peace and quiet" like a Fresh Direct or now Amazon truck.

That was my first thought as well: just what we need, more trucks idling their motors at all hours of the day. I don't suppose these are biodiesel?

Yes! These trucks are loud! So much for being green, having a truck runaround with your groceries, hope you ordered organic. Must be the same people that order on line from the "made in China"shops on lower broadway.

Unless they can deliver my groceries for free with a drone right to my window I think I'll stick with walking to the corner store. I like stores, and if Amazon has its way grocery stores will go the way of Kim's Video, Borders Books and Tower Records.

What happens when there are few stores, all the jobs are in an Amazon warehouse, and they get to determine the prices? We turn into the capitalst version of North Korea.

Amazon has done a great job of decimating one industry after another (books,music, video) yet has very little in profits to show for it (they lost $200 million over the last 5 years, while Microsoft made $25 billion) and we are left with fewer jobs, a chain store economy, and now groceries on wheels.

They just use their stock market money to steal market share and relentlessly undercut prices, give away free shipping, and invest in giant distribution centers while our local stores close down, just to satisfy the public's demand for the laziest and easiest way to get their grubby hands on any product they could have had by walking to the closest store.

All so that a few investors can get very rich while countless people lose their jobs. What a nice business model.

Anonymous 1:03 - perfectly said! Amazon is a catasrophe in its business model. Your list of casualties is accurate and will grow as they continue to exist. I, too, like stores and seeing people, talking to grocers, interacting with life not just sitting in my overpriced apartment on what would be my now oversized ass because I'm too lazy to walk downstairs to get my food. And for those of you thinking it - don't tell me "I'm too busy - it saves time"... Bollocks

Thank you again, Anonymous, for all your accurate points. Well said.

Say what you want about Amazon's business model but why are you so protective of small NYC grocery stores? The quality of produce at places like Keyfoods and Met are pretty terrible and prices across the board are overpriced. if companies like Amazon and fresh direct need to store food in jersey in order for me to get access to cheaper and better quality food, then so be it. I don't need my groceries to cost an arm and a leg just so they can have a Manhattan address. I'm not sure about Amazon but fresh direct does buying straight from local farmers meaning that you are able to get fresher produce while supporting local farms. The best brick and mortar options are Whole Foods and Trader Joes but who has the mental and physical stamina to wait in those crazy lines? When I do go to TJs, I have them deliver anyway because I can't carry that all home without having to return in a few days and relive that horror.

Both Fresh Direct and now Amazon are really extensions of supermarkets. So what's to prevent you from walking there and personally squeezing the melons?

I use Flesh Direct. They don't bother with these trivial vegetables, supplying local rabbit, jersey venison and bowery beef on a whim

What's next? The service that sends someone over to wipe your ass?

Really Amazon, do you really have to get involved in sucking up every last nickel away from every other business? Do you really have to try and corner the market for every last damn thing ever sold? How is that good for me? You have become too big now and rapacious and I'm actively going to cut back on using you because of this. NYC vehemently does not want Walmart for a reason. You seem to be our Trojan Walmart.

People who would use this and Fresh Direct are the same ones who rides Citi Bikes because, you know, it's good for the environment. Clueless, entitled, and hypocrites

The biggest problem with Amazon's business model is that it results in Amazon becoming the largest player in each segment, they become an oligopoly can then dictate prices.

In the long run there will be less competition, less selection and higher prices. If you think their shareholders will allow the company to artificially hold prices down when they can easily raise them then keep dreaming because this will be an economic nightmare.

With fewer local chains available you end up with overpriced boutiques and generic chain stores, which is what we see happening right now. That's not a very interesting or healthy economic model for any city.

Where does this once vibrant tax base go? It all goes away. What about all the local services and suppliers that depend on those businesses? They are gone too, and with them all the jobs and tax revenue. It's a time bomb for the local economies that will hit a tipping point once Amazon and other like it have taken over every last business segment available.

If you run a local business that depended on workers who have lost their jobs, then your business suffers too. And if you enjoy the convenience of walking down to the corner store for groceries or anything else Amazon sells, once those stores are gone so is the convenience and local flavor they provided.

Amazon is also planning to use robots in all of their distribution centers, replacing tens of thousands of their workers with machines. So when your unemployed kids are looking for a summer (or full time) job at the Amazon warehouse they will be out of luck. But not to worry, I'm sure Amazon will have an app for that too.

NOTORIOUS.....perfect name for your idea =

There is a place for grocery delivery if one is unable, for health reasons for example, to go out and shop. Otherwise, go pick up your own groceries, from a store ; it's good for the environment, good for local business, and good exercise.

The trucks, on the other hand, are another source of noise, traffic, and pollution.

All that useless space now taken up by grocery stores and other staple food purveyors could be more usefully refunctioned to provide luxury cocktails.

You're fucked either way. Either you shop locally and get gouged for second-rate groceries, or else you climb into bed with the corporate baddies like Freshdirect or Whole Foodcorp or whatever, which makes you scum of the earth in a moral sense. See, you can't win. What a bum deal we have here in NYC 2014. All the bullshit and none of the fun. It's not even cool to say you live here anymore.

If the closest store was Associated you would be singing a different tune.

I used to use Fresh Direct but I stopped. Too much kale!

Today I go to Fairway in Red Hook, when I can. Otherwise, Union Market. Cheap and delicious!

very Cat in the Hat

And what the hell is "too much kale"? That's totally ridiculous; like saying "too much farting."