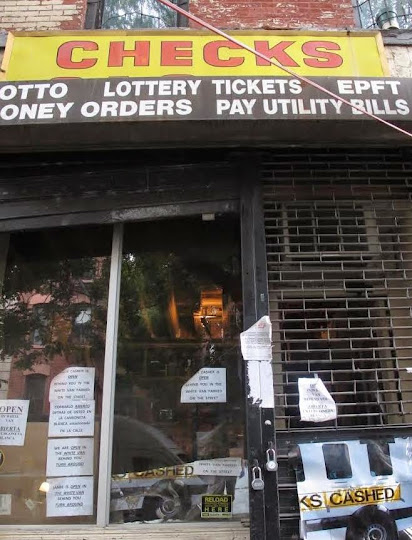 The saga continues for three small businesses on East Fifth Street just east of Second Avenue... back in July, the shopkeepers had to vacate their storefronts due to a structural issue in one of the apartments above in 300 E. Fifth St.

This week several readers noted that Jamie's check-cashing storefront has been gutted... as these photos via Derek Berg show... 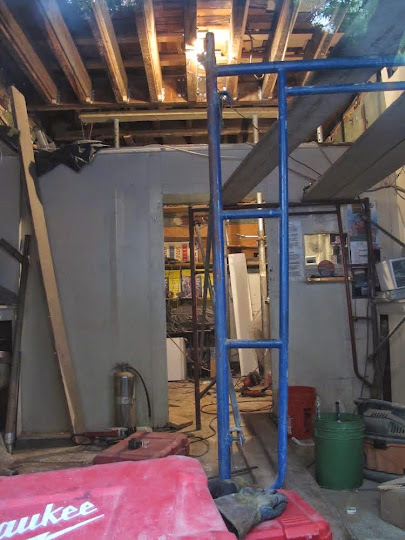 Jamie, whose family has owned the business for 67 years, has moved his operation to a secure van outside his shop... He is understandably frustrated, but remains hopeful that he can return soon... workers are strengthening the ceiling and floor joists.

Previously on EV Grieve:
3 small businesses temporarily closed due to structural issues at 300 E. 5th St.
Posted by Grieve at 5:00 AM

Email ThisBlogThis!Share to TwitterShare to FacebookShare to Pinterest
Labels: Jamie the check-cashing guy

There was an amazing clown painting hanging in there right by the bullet-proof glass teller window. Did it survive? I had coveted that clown for years.

Four apartments above these business' were forced to vacate as well. I know the former tenants there, they were thrown out on the street and the management company RA Cohen and ownership did absolutely nothing to help them. The management company is so corrupt that the tenants are suing as they are holding onto their security deposits/prepaid rent and offered them nothings.

If you can avoid it, stay away from this dangerous address and even farther from the RA Cohen management company.

We fear for our lives regarding R.A. Property management co. They are politically connected w donations to having ties w police union.

Even crushing pills and eccentric as it sounds? It also happened to PI Eric Saldariagga. Death threats by delving into medical records to create a supernatural death of mayocardial disease. My husband has powder on his face. Drilled holes and using architectural stealth skills to use vents to blast in heart disease causing chemicals is just one scary eviction trick. We admit our issues run deeper as we are blamed for issues they "happen" to have w now deceased PI Eric Saldariagga.

The everyday matter at hand was usal demotlition as harassment. But using brut force upon my disabled husband to create a vacancy is an al time low.

We are not surprised at tell tale ruthlessness. Frivolous eviction court date tommorow. "An offer you can't refuse"