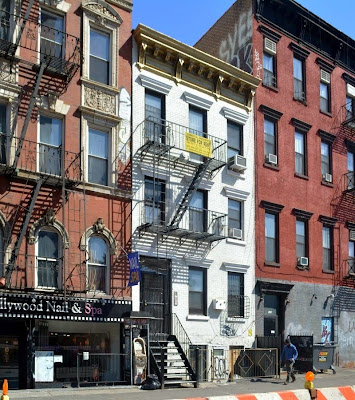 Back in May, we pointed out that the 3-floor building at 118 E. First St. just off of Avenue A and East Houston was on the market for $5.15 million.

Among other things, the brokers were selling the space as either a development site with an additional 9,000 square feet of air-rights … or a "cash flow opportunity" with three apartments and a retail space.

Not surprisingly, the building's new owner has opted for the development site in the form of a 9-floor residential building.

Per New York Yimby, who first reported the news:

[A] developer operating under the name of Acacia 118, LLC – based in Nolita, and fronted by Cynthia Wu and Robert Marty – is planning to erect a new nine-story building, with seven much larger apartments.

As with many new projects in neighborhoods that once only supported rentals, 118 East 1st will likely be condos, with its seven units divided over 12,500 square feet of residential space. The average size is a quite hefty 1,800 square feet, with duplexes on the top and bottom and full-floor units in between, according to the building’s Schedule A filing.

As we've pointed out, 118 E. First St. was home some years ago to Darinka, the performance space that Gary Ray opened in 1983 (RIP — 1987). Darinka's many performers through the years included house band They Might Be Giants and cabaret nights hosted by Steve Buscemi and Mark Boone Junior.

Previously on EV Grieve:
118 E. 1st St. arrives on the market with so many possibilities, and air rights
Posted by Grieve at 5:03 AM

So basically as soon as they finish all the construction in front of that building, they will start demolishing the building. sad timing.

Thank you for reminding me of the name of the club where I first heard TMBG back in the day! But a shame we'll have yet another luxury "hi rise" on Houston.

Seriously what is wrong with this city? Why does every smaller nice old building have to get knocked down?