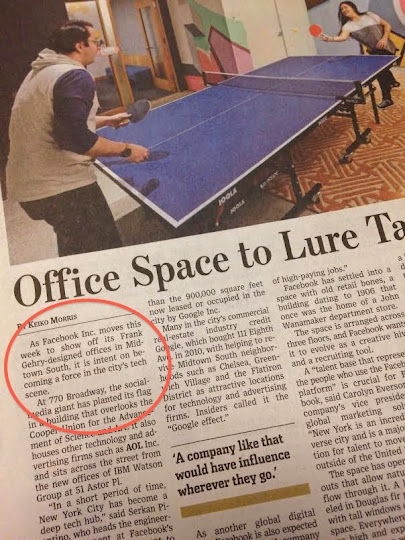 Report: Maps show that Midtown South does NOT include the East Village/Astor Place
Posted by Grieve at 1:28 PM

Can you poke the facebook employees in the death star lobby?

This all worked out so well in San Fransisco.

Added perk of the new location: maybe they'll run into Shingy! He works in the same building!

I am so glad I'm not on that vampire social media site.

Go ahead Facebook, you can have this neighborhood. Go nuts. Fucking assholes.

I"m sending them my resume today. I love ping-pong!

Just in time for the flood

Circles? ... what happened to the famous Arrows?

I’m sending them my resume today as well. I love beer-pong.

EVT hurry before they fill the role of the ping pong ball!

Good idea EVT SMDH! I hear they're looking for bloggers who can say absolutely nothing in 500 words or more!

Jesus criminy where the fuck is midtown south? is it fucking No Mad cos Noho thinks it's Nolita or is somewhere south of FiDi between the Staten Island Ferry and Coney Island?

SMDH did you really think nobody would detect your tone of voice in your new fake blog?

Now the local pharmacies will be short on estrogen packs! Thanks beta males!!!

All 500 of these Facebook employees were recently shipped to NY in those giant Robot Butler boxes.

Midtown south is far more easily referred to in its traditional form: DOWNTOWN.

This is not Midtown South. And anyone who thinks so knows nothing, absolutely nothing, about Manhattan.

Hysterical. Astor Place is Midtown South? Who sold them on that bill of goods? No matter...it is great to have a tenant like Facebook in....THE EAST VILLAGE.