Gracefully is closing on Avenue A 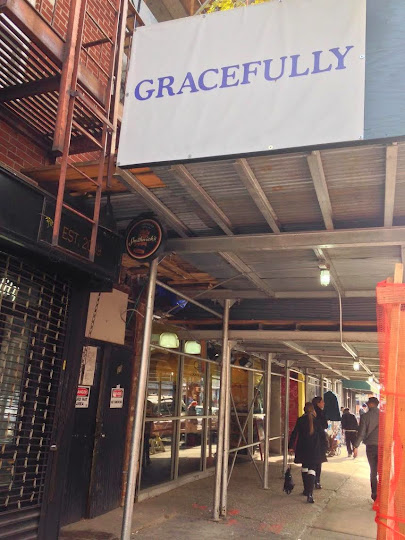 A few weeks ago, the market at 28 Avenue A between East Second Street and East Third Street cut back its hours, forgoing around-the-clock sales for an 11 p.m. closure.

Now comes word that the store will be closing for good soon. We've heard as early as this Friday … or by the end of the month. An employee confirmed the closure to us. 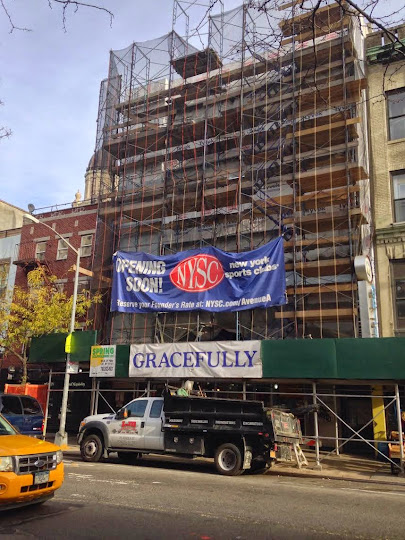 We were trying to remember when Gracefully opened — 1997? Anyway, long before Whole Foods… and, more recently, Union Market.

As far as we know, there are still three other Gracefully locations in the city, including on First Avenue in Stuy Town.

Thanks to @AnnaRoseMusic for the tip

Familiar Burger-Klein sign has disappeared from Avenue A
Posted by Grieve at 5:05 AM

Does anyone know what's going on with the Gracefully in StyTown? It's on 23rd, and it has been in the construction phase forever and still isn't open.

My recollection is that it opened in 1994, although I could be mistaken. Walking along the north side of 8th St. east of 5th Ave. recently, I spied a "Gracefully" sign on a vacant commercial space.

ALl for a disgusting, ugly, corporate gym so more annoying loud people will move east.

Meh, I don't really care. The sandwiches were good, when the guys didn't screw them up, but they were rude and overpriced. If this was 1997 people would be complaining that a gourmet deli opened and kicked out the local business that was there before "so more annoying loud people will move east." The east has always been loud. Ever since Dolphin closed on 2nd and B there hasn't been a mainstream gym in Alphabet City. I'm fine with this.

Their hot table is pretty good, if you know what to get you can do very well there. Will miss it, tho not as much as Bereket.

More true than ever is a great line I overheard one construction guy say to another when they were working on the fancy renovation of the building next to mine - "Man there are so many restaurants down here, but no place to EAT!"

Once the hotel for rich people's dogs moved in a few doors north it was only a matter of time. Gracefully was always the yuppie grocery before the grotesque Whole Foods took over East Houston. I bet the gym won't last more than two years max.

Do whatever you want with the space, but please just bring back the Burger Klein sign.

And regarding that gym, don't these NYU brats get access to a gym facility at their school included with the $60,000/year or so tuition? So what do they need a gym membership for anyway?

Hey 9:55, Dolphin is still open 24/7 right down the street on 4th. If their rates are not "mainstream" enough for you at like $200/year during their frequent sales, well good luck then.

NOOOOOO. They have the best and cheapest sandwiches. SO SAD

Oh no! Where can I buy a $12 thing of pine nuts for making pesto! DAMN THE BROS!

are you freaking kidding me!?!?! this is really a stab in the heart. i was considering joining this gym, but now fuck them. no fucking way. i hate this place more & more every day. who wants to buy my apartment? i need out.

Unfortunately Gracefully went from a staple of my weekly life living two blocks away to a total avoidance ever since they changed their deli meat purveyor. The sandwiches have never been the same since.

I moved to the neighborhood in 1996, and that space was a nice Korean deli. It didn't become Gracefully until a year or two later.

According to a NYSC rep I spoke with in September, the gym will open for business in January 2015. That seems a little optimistic, however, especially if Gracefully doesn't close its doors until the end of the month.

So how many floors does this gym need? Is it certain the ground floor will not be rented to another business that benefits from street traffic which I reason a gym does not. Walking by gyms with people on treadmills does not encourage me to join. Maybe a store that sells those dreadful yoga pants and protein drinks will occupy this space.

i love yoga pants as much as the next guy who sees a young woman wearing them on the street... but something about the new york i moved to doesn't mesh with people who are "proud" to be exercising all the time.

DrScientist - you should check out Philly, and I say this without sarcasm, or much anyway. i've never seen anything like Market Street around 1 am when the bars close...most of these people will live the same lifestyle anywhere they live: cellphone obsession, booze, opening the chakras to the demons & finger food experiences.

The report of Gracefully leaving to make way for NYSC is false. NYSC taking floors 2 through 5 with a lobby entrance on the ground.

It more than likely has something to do with Union Market and Whole Foods opening nearby and the fact that they have the new store opening on 23rd & 1st.

I think it was ’97 when Gracefully opened. That was where I bought groceries when I lived in the LES. That and Key Food on A (probably also gone?). Sad.