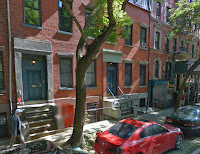 On Monday, Jeremiah Moss reported that the popular Bonnie Slotnick Cookbooks was not having the lease renewed for its 15-year-old Greenwich Village shop.

However, Slotnick may have a new home already on East Second Street between the Bowery and Second Avenue.

After reading news reports about Slotnick's troubles, a pair of siblings reached out to her on Tuesday about a retail space available in their childhood home on East Second Street.

Margo and Garth Johnston had been searching for a retail tenant for the belowground space when Margo came across online reports about Slotnick's situation.

"I sent it to Garth and said, 'I’d kind of like a bookstore,'" Margo Johnston said. "And he called me immediately, and we called Bonnie."

The siblings told Slotnick about their mother, Eden Ross Lipson, who owned the building until she died from pancreatic cancer in 2009. Lipson spent more than three decades reviewing books for the New York Times Book Review, and she had an extensive cookbook collection.

The basement-level commercial space is triple the size of the space Slotnick currently pays $3,500 a month to rent at 163 W. 10th St., DNAinfo notes.

The siblings could, of course, make some money off the retail space.

But Johnston assured Slotnick that she and her brother are more concerned with finding the right tenant than the rent.

Wow, this is fantastic news!

The new jazz club Mezzrow is in the basement under Bonnie's current W Village shop. Wonder if the rent hike will kill a nice new club that just opened? OY.

Just when you think all is lost, we get a great story like this one.

Love normal, good landlords like this. I am lucky to have similar landlords.

What a great attitude, I wish more landlords/owners took responsibility like this instead of blaming the state of NYC real estate on "the market".

Well, the Johnstons are lifelong neighborhood residents and excellent humans, and their parents both lived and breathed books and are doubtless dancing on the tables of whatever atheist Valhalla East Village bohemian types go to when they die.

I moved from the West Village (a few blocks from Bonnie's shop) to East 2nd Street a little over a year ago. Couldn't me happier that she's hopefully found a home on my new block!

Excellent! And speaking of bookstores, a new Hungarian one has just opened at 516 East 11th Street!

Interestingly, I always noticed this shop when I took the M8 across town from the West Village to the East Village. The store had previously been called "B. Strong, Inc." for Bob Strong, former owner of Rescued Estates on East 3rd street and 2nd avenue—now home to one of The Bean coffee shops.

Nice to know Bonnie Slotnick is a real person and that she's found a new home for her store.

Yippee for us! Compiling a list of cuisines I want to try cooking now...

Thank you to the owners of the building for making a home for Bonnie's bookshop!