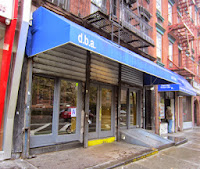 According to BoweryBoogie, the heirs of d.b.a. had reached out to McWater about taking over the ownership.
Posted by Grieve at 12:12 PM

One big change: I was informed last night by one of the new managers that the bar would no longer be dog friendly.

This is David McWater, I don't know who you spoke to, no manager has been chosen.
I haven't even thought about dogs much less changed a rule.

Hi Davey Mac,
Thanks for checking in but I did hear from someone that was at Dba last night that the dogs were going to be out.
FYI.
I wasn't there so I don't know...

I understand you are considering banning dogs, but can you at least keep it biscuit friendly?

They go really well with .drunk.


Regarding the DBA yard,enclosed and out door area closes at 10PM SHARP! As a tenant of the building please respect this David M.

I was told the same by management when I tried to bring my little guy a couple weeks ago. I really hope it's not a permanent policy shift - I've patronized dba over other local spots for years because I could bring my pup. I know many other people in the neighborhood choose dba for the dog friendliness as well.

You all realize that any bar or restaurant can be shut down immediately (and possibly permanently) for allowing non-service animals....right? You shouldn't be hard on food service establishments (bars included) when all they are doing is trying to obey city regulations and keep their doors open.