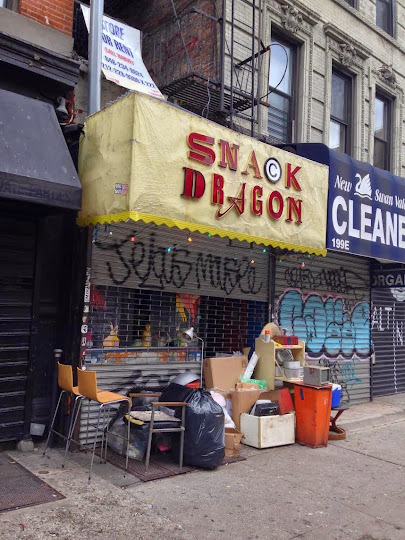 Last July, the East Village Snack Dragon Taco Shack announced that it would be closing after a huge rent hike courtesy of landlord Steve Croman.

The sliver of a taco stand and hangout at 199 E. Third St. just west of Avenue B managed to stay open through Halloween night. Snack Dragon is now officially closed.

This past weekend, the contents of the shop were brought outside for sale … and giveaway.

The space remains on the market. The asking rent is $4,495, which is particularly insane given its size.

Previously on EV Grieve:
Cromanated: The East Village Snack Dragon Taco Shack is closing
Posted by Grieve at 3:00 AM

There's no place so small a bar can't be shoehorned into it.

4 and a half grand for a closet with a sink? this Steve Croman seems like a real a-hole. im gonna miss that black bean on a corn tortilla thing :(

This place was decent and unpretentious. Fuck Croman.

Did anyone ever eat here? I always wonder how these small places manage to survive.

Another restaurant in a recent Croman building purchase at Avenue C and 8th Street had Marshall repossess signs this morning. I'm fearing what kind of ridiculousness would need to go in there in order to pay the ridiculous rents he charges.

I did, as did most of my friends. That space was downright luxurious compared to when it was initially a stand in front Mama's.
Other people who ate here include at least 183 people on Yelp who reviewed Snack Dragon, along with all the folks who voted it into various "Best Late Night Food" categories in the Village Voice Awards over the last decade.
Their prices increased over the years, unfortunately, likely as a result of the economy/rising rents, but was still a far from exorbitantly-priced meal.
And here I thought serious bloggers like you, East Village Today (*giggle*) were SO in the know.

At least the LES location is still around. Am still going to actively boycott (and encourage everyone to do the same) whatever will pop up here, just so that this Steve Corman fellow loses money on this tiny bit of real estate.