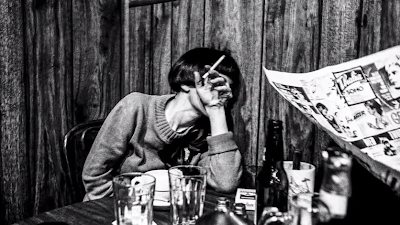 [Screengrab from the "Night Watch" trailer]

The Times has a feature today on Ken Schles, who spent part of the 1980s living and taking photographs in the East Village.

He now has a follow-up to his 1988 book "Invisible City" titled "Night Walk."

Schles revisits his archive and fashions a narrative of lost youth: a delirious, peripatetic walk in the evening air of an irretrievable downtown New York as he saw and experienced it. Night Walk is a substantive, intimate chronicle of New York's last pre-Internet bohemian outpost, a stream of consciousness portrayal that peels back layers of petulance and squalor to find the frisson and striving of a life lived amongst the rubble.

Here's a trailer for the book...

Schles, who now lives in Fort Greene, "rejected the recent tendency to view the East Village of the 1980s as a golden age of louche glamour," according to the Times. "A lot of dysfunction has been romanticized," he said.

The book "is dedicated to the memory of those who died in the scourge of AIDS and violence that gripped the East Village during the 1980s."
Posted by Grieve at 9:57 AM

Lest we forget, half the artist population in the EV in the 1980s died from AIDS

Maybe people glamorize it because many artists tolerate chaos and dysfunction easily. The new norm of the east village seems to be that the chaos and dysfunctional quickly become the prey of the entrepreneur looking to make a quick buck. Rent-seeking is the new scourge of the village now. Given that the city is now firmly behind (or run by) the plutocrats rather than the upstart artist this is what I see as a new trend. I can sympathize with those that would pave over the potholes of the 70s-80s village. I wish I had seen the art and performance scene at its chaotic apex.

Personally I view the often touted dichotomy between the rampant louche seen in past decades with the current gentrification as false.

Hey.. they reject it now also..too many rich wanna be 'bohemian' ...given that everyone's a critic.. and nothing is ever perfect..as an artist living in tbe east villsge in the 80's ..i would take those days back in a second...