Two members of the NYPD were shot and killed during an ambush on a Bed-Stuy street yesterday afternoon.

The officers, Wenjian Liu and Rafael Ramos, were in their squad car when the gunman, identified as Ismaaiyl Brinsley, shot them at point-blank range. 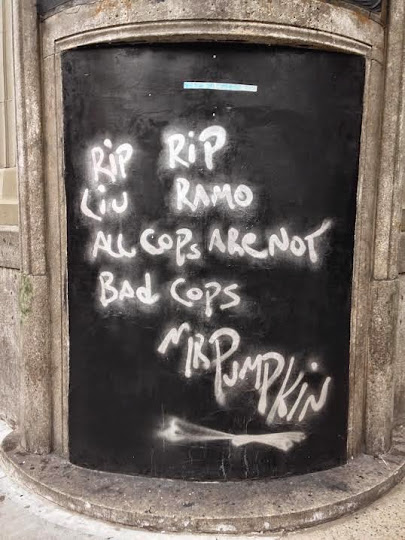 Brinsley, a Baltimore resident, later killed himself in a subway station.
Posted by Grieve at 9:25 AM

Now it is time for media spokespeople like our former mayor Giulani and Pat Lynch, the head of the PBA, to begin to act like responsible adults and tone it the fuck down so that we can, post Eric Garner, start mending relations between the NYPD and the communities they serve.

This is a horrible and shocking story.

Most cops are good and join the force for the right reason: to protect and serve, but by enabling bad cops to get away with murder lest other cops feel they are not being supported (US vs THEM), the NYPD creates a climate of distrust, hate and anger between cops and members of the public.

If the NYPD would just weed out the bad apples like Pantaleon (they were fully aware of his bad history, yet he was still on the force the day he choked Eric Garner to death with NO proof that he was doing anything other than standing on a sidewalk) and not allow other kkkops to make a MOCKERY of the murder of a Black man (with a parade of their own + "I CAN Breathe" tee-shirts), something extreme like innocent cops getting shot would not happen.

Did the protests enable this terrible and crazy actor? yes they did. It doesn't mean the protestors are wrong -- they're not, at least not the majority -- but we should recognize that we may be inviting in the extremes and the unbalanced and try to avoid that. (BTW I include PBA head Pat Lynch in the latter group.)
I am so sorry and sad that this happened to the two officers.

The protesters didn't do anything to enable this sicko. He was committing crimes across the South, Baltimore and then tried to murder his - ex.

These cops were assigned out of their regulkar precinct to an ant-terrorist unit, specifically designed to monitor the projects. But I'm puzzled why they were sitting in their patrol car in the middle of the afternoon. And, then, not notice someone coming up to them. I don't mean to be callous, but were they on their cell phones rather than watching the neighborhood hoodies?

@1:53
Congrats. You're in the lead so far for stupidest comment of the day.
I'm not surprised the you are puzzled.

Anonymous 12:08, The protesters are not in any way responsible for this, not even indirectly. When police function as an unaccountable armed militia some unstable individual will treat them as one. Failure is systemic and political.

No disrespect 3:29. Just my observation. I see too many patrol cars pulled over with one or both partners on the phone, usually texting, oblivious to what's going on around them. That alert from Baltimore police, by the way, came in at 2:15, saying that a ping was picked up in the 78th. The Baltimore police were very very specific. But no one acted on it. Sound familiar?

Anon 4:46: The alert came in at 2:15pm, the cops were murdered at 2:17pm. Just how fast do you think the folks at the precinct fax machine are to spread the word to the street about an armed suspect somewhere in the city? Two minutes is cutting it very close.

Oh yeah, you're right 4:46.
Cops should be sitting in an armored humvee behind gun turrets aimed at each person as they walk by.
…Just in case.

I guess if you get shot in the back of the head while your walking down the street, or standing at a cross-walk or something, we'll say you should have been more on your toes as a New Yorker. Oh, well.

With all due respect, this unspeakable crime against the officers is a perpetuation of two wrongs not making a right. The underlying issue is hatred, intolerance, and unaccountability from a group of extremists refusing to ration with reason and insight. If it wasn't for the great and beloved police force in this city, a task force of 38,00 men and women, one of the most revered in the world, anarchy would rein. I see no problems with protesting or speaking out against what transpired recently, both of which were unfortunate and tragic situations, but there has to be limits when taking your mission to the streets in viewing public. This murderer, comes across as an mentally unstable, angry black man, who acted out of revenge, based on a film perhaps or a dare? That's insane. What did he accomplish by killing to cops and his girlfriend and then himself? Lives were lost. Will others copycat under his namesake? HIs fatal decision is an ugly repetition of what is to come. Our society is angling toward sadistic approaches to create points and for others to listen. Perhaps there needs to be a protest for the innocent, fallen cops? Do black lives matter? Absolutely. Do Hispanic lives matter? Yes. Do White lives matter? Of course. Do cops lives matter? Yes. ALL LIVES MATTER. End the violence, take positive, nonviolent, legal action, and be compassionate to one another.

Members of the City Council hold a "die in" on Broadway and block traffic. Protesters chant " What to we want? dead cops, when do we want it ? Now". ( it's on you tube). A Sergeant gets sucker punched at the ferry terminal. A Lieutenant gets his nose broken on the Brooklyn Bridge . The guy who turns himself in for that assault works for the SIEU. Mayor DeBlasio then meets with the protest organizers at an SIEU office. And Lynch is wrong ?

We're talking about systemic abuse and murder. Some people in the demonstrations have had direct experience with this. Their voices stand out as extreme, compared with those who have had no experience with it, direct or otherwise.

Lone killers are not responding to the words of protesters, but to a lifetime of police abuse.

Fire Bratton, muzzle Lynch, reduce the police by half, make it a requirement that you live in the city if you work for the city. Oh and make it illegal and very very difficult to sell semi-automatics at pawn shops in Georgia to under-aged, mentally unstable youth. Nuff said, nypd trolls?

I'm fine with blaming the deaths on de Blasio as long as we are blaming 9/11 on Giuliani.

@8:23 will the city residency requirement you suggest apply to Mrs. Deblasios (former) chief of staff who lives in Jersey?

After 10 years and millions of totalitarian style stop and frisk, I'm surprised more of this doesn't happen. I don't approve because the real totalitarians sit back in their limos and private supper clubs and enjoy their whores and cocaine.

Yes. Brilliant idea. A former employee will have to move to satisfy the requirements of a former job.

Lynch says that De Blasio has blood on his hands, but De Blasio is not the one who shot an unarmed kid in a stairwell or choked an unarmed man to death. If anything happens to Mayor De Blasio the blood is on Lynch's hands. It's time for Commissioner Bratton to rein in these cops before this ting goes too far. The police already have the right to shoot and kill anyone and not be indicted, and now they also don't want anyone to criticize them for it when they do? Hurt feelings do not equal dead kids.

Yes lets reduce the police force by half. I'm sure that would work out well. As far as the city residency requirement is concerned, that change happened back in the 60s and is part of the contracts. My understanding is that it applies to all city employees. I'm sure all the other city employees will be happy to move back into NYC. Good luck getting that changed. What is more likely to happen is that the NYPD will go back to what they used to do pre- Rudy G. They used to just ride around in their cars responding to 911 calls. That's all they did. They did the bare minimum of work and went home. My guess is that's what the union will tell officers to do. If the residents of NYC want a less active, less aggressive NYPD then that's what they should get. No more stop and frisk, no more tickets for quality of life offences, no more arrests for weed or open containers. That should satisfy everyone right? And if the parks revert back to drug dens and the trains become unsafe at night and if muggings and rapes and assaults go up- well that's just part of living in the big city right? That's what they used to say back in the day. That's just how NYC is. People want the old days back. They should get what they want.

Something to keep in mind is that the police are the first line of defense of the class-based society. The issue of good vs. bad cops is secondary to that.

I just passed by that corner and everything has been painted over.

Yes that is what people want. Maybe we should also bring back quotas, graft, and child labor. Brilliant analysis!

Well they already got the dead cops they were chanting for. And graft and child labor never left nyc. People don't want a less active/aggressive NYPD? That was diblasios entire campaign. When did you move here 2009? Pining for an era one didn't live in. Amazing all the transplants who dont get how quickly this town can change.

My family including myself have lived here 5 generations.if they didn't want that then why did they vote for it?

Yeah, when you start a war sometimes you lose soldiers. Why are we crying for these bastards?