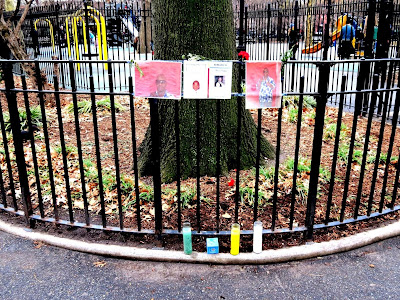 There is a small memorial in Tompkins Square Park for Harlem resident Aleim Perkins. According to published reports, he was playing with his 6-year-old niece in the playground off East Ninth Street and Avenue A on Dec. 15. Witnesses have said he was aggressively pushing an empty tire swing when it struck him in the face. He was rushed to Beth Israel, where hospital officials said he was dead on arrival.

Previously on EV Grieve:
Witness to a tragedy in Tompkins Square Park
Posted by Grieve at 7:36 PM

I always thought that attaching a tire to a chain and encouraging its use as entertainment was a formula for traumatic brain injury.

An examination of the autopsy report, if an autopsy was performed, would be informative. To get hit in the head by a tire swing and declared dead on arrival at Beth Israel warrants investigating into the presence of co-moridities. Interesting and tragic!