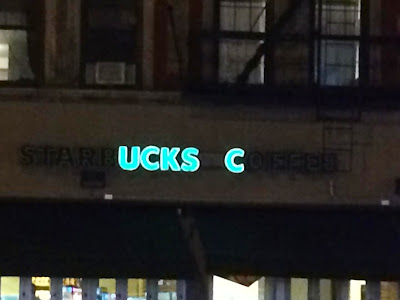 Fiore “Philly” Caruso, 59, who the Post describes as a reputed Gambino associate, was indicted yesterday for allegedly selling undercover cops guns and cocaine.

And a local angle:

Before his latest arrest, Caruso unwittingly made a sale to cops Nov. 13, outside an East Village Starbucks, where he traded a bag with six guns and ammo with an undercover agent for $13,000 cash, authorities said.

Which location do you think is best for allegedly selling a bag of guns to undercover cops? I'm going with Second Avenue.
Posted by Grieve at 7:29 AM

Hmm, I dunno. First Ave. & 3rd St has those benches, which makes it easier to leave the guns and take the cocaine.

Yeah, the 1st/3rd one was my first thought, too. It's closer to Little Italy, too. Don't forget "Rice to Riches" (closest to 1st/3rd) was a front that they raided a few years back.

Given how the parameters of the East Village have shifted, thanks to the real estate industry renaming it Midtown South, West Village East, Alphabet City South by Southwest, and God knows what else, I am guessing it's the Starbucks on 48th and 3rd.

No place is good for plain clothes, but Astor Place would probably be the best spot if you were trying to sell those guns to tourists. And a Starbucks makes sense because you can stop in and warm up with a hot cup of coffee between customers.

"Yeah, I'd like an Ammo Cappuccino......and throw in one of those Triple Christmas Snow Lattes.....IF you've got any left."

Astor place and another at a location at second avenue... Both in the east village. Says so in one of the reports.

I hate StarSucks with a passion but I have to say the one on 2nd ave is just hours of entertainment. Not as much as the one that used to be on Astor where Kevin, infamous stalker of Rhianna now, used to practically live at...but still full of crazies and great for people watching. There is not one normal person in there. One time there was one and they went to use the bathroom and simply never came back out. It absorbed them.