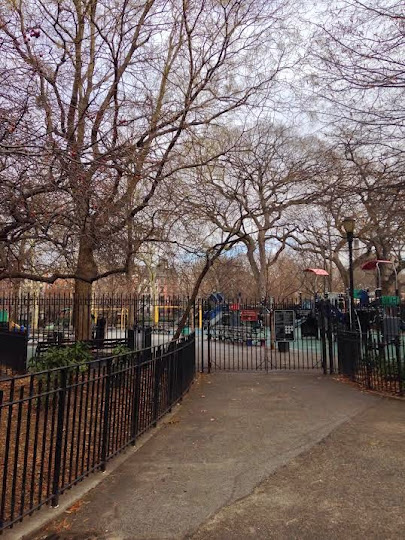 The city isn't removing the tire swing that killed a man in Tompkins Square Park on Monday afternoon, the Post reports.

Harlem resident Aleim Perkins, 39, was playing with his 6-year-old niece in the playground off East Ninth Street and Avenue A. Witnesses have said he was aggressively pushing an empty tire swing when it struck him in the face.

"We do not plan to remove the swings at present. A close inspection yesterday found the swing to be in safe working order," a Parks Department spokesperson told the Post.

There are 53 tire swings in NYC parks. According to the spokesperson, this is the first time anyone has ever died from a tire swing injury in a city park.

Previously on EV Grieve:
Witness to a tragedy in Tompkins Square Park
Posted by Grieve at 3:45 PM

As well they shouldn't. Accidents happen.

If he hadn't been shadowboxing with a heavy object which was made all the more dangerous thanks to physics, he'd still be alive.

Oh dear God no, please don't remove the tire swings. My kid loves them more than anything. I promise I won't hit myself in the head while pushing him on it.

Seriously, this was a freak accident. If the dude had been hit by a speeding limo, the city wouldn't ban cars or streets. NYPD would be all "No criminal intent," and we'd all grumble in the comments sections of local blogs, and that would be the end of it. But this happens and there's talk of tearing up the playground?

How about putting up a sign that says: "Adults: You're here to supervise your child, not act like one. Please don't put the children or yourself in danger by doing something stupid."

I assume we're talking about the horizontal parallel-to-the-ground tire swing held up by chains. That is an actual tire, and it is LOW to the ground so kids can climb on, and I was thinking about the sheer strength you'd need to get it to swing high enough to hit you in the face. (It would actually be impossible to do with a child on it.) I feel terrible for this man's family, but I agree, the swing itself isn't dangerous. I'm worried that the BAN ALL THE THINGS parents will come out in force (I remember how upset they were when the new playground opened b/c there weren't clear sightlines to everything all over the entire playground at the same time -- oy) but having things that spin and that you can really climb and having shade trees are all GOOD things. The other playground in Tompkins Sq Park is a perfectly innocuous, utterly unchallenging little-kid playground. This is a fun playground for older kids, with big-kid swings and taller slides and things that can spin so fast you barf. (I know. I have a barfer.) Again, I'm sorry for Mr. Perkins's family. But the city is making the right call here.